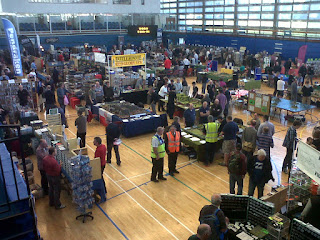 I've just got back from SELWG at Crystal Palace. Its been a very successful and enjoyable day, which is good considering my attendance was in doubt until a few days ago.

I had a load of stuff to sell on the Bring and Buy stall which is the first time I've done this. It was a resounding success with all my items selling by 12:30 meaning I received a welcome cash boost halfway through the show.

I picked up a selection of models including a couple of Sd Kfz 234/2 Puma armoured cars. I also bought a couple of 1/100th plastic tanks by the Russian manufacturer Zvezda. I bought a Russian T34 and a Panzer II not because they fit in any army list but just because I like these vehicles. The quality of the models looks pretty good and I may get more of these online.

Another star purchase was a set of four resin farm buildings for just £13.50. They can be assembled either as a courtyard farmyard or separate buildings.

As well as my bought items I also took a couple hundred pictures! I'll work on these over the next few days and post them here as soon as I can.

The only downside this year was the continued hygiene issues that some gamers seem to struggle with. On more than one occasion I was assailed by the overpowering smell of BO. It was so bad that it felt like I'd been pepper sprayed!

Overall this was a very enjoyable event and remains one of my favourite small shows in the calender.
Posted by BigLee at 17:04

Email ThisBlogThis!Share to TwitterShare to FacebookShare to Pinterest
Labels: SELWG