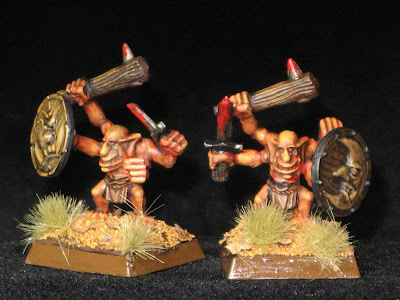 These models are conversions I made several years ago to feature in a home grown campaign written and run by the EvilGM. The Chabra as they were called were one of his best creations and his worlds equivalent to Goblinoids. There were various types but these little critters were the most common and proved a real problem in combat.

I made these models from a couple of old Games Workshop plastic goblins. Being plastic it was relatively easy to remove the arms from another goblin model and position them on these figures to give them an extra pair of arms. A little green-stuff and some careful sculpting helped the new appendages blend in and look like they belonged to the figure. A relatively simple conversion job but they looked effective. 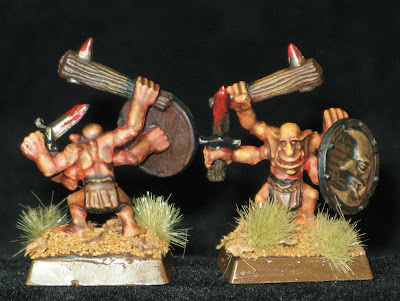 These models were found in my old collection of figures along with the Undead Standard Bearers I unveiled yesterday. Like those models they needed a bit of work as these were also gloss varnished and rather poorly based. They were also quite dusty and needed a good clean before re-varnishing with DullCoat and getting an upgrade to the base 'dressing'.

These models have spent most of their life stored in a box and hidden from daylight. Now that I've given them a spruce-up they are going in my display cases to provide a constant and happy reminder of a great DnD campaign.
Posted by BigLee at 08:27