That's a lot of Lead 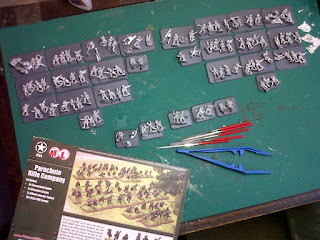 I had one of those "Gulp! What have I let myself in for?" moments this morning. I've started to assemble the US Parachute Rifle Company that I recently bought on Ebay (absolute bargain at just £17). I started with the usual sorting through the box to make sure everything was in there and then organising the figures into teams. This took an evening just in itself, selecting sets of models that compliment each other or belong as part of a team (the mortar crew for instance).

I glue all my figures to their bases before painting, then build up the plaster basing material around them before priming the figures. I've reached the plastering stage and I looked at all the models this morning - 29 teams in all - and realised what a mammoth task I have before me. Given my notoriously slow painting speed I can see this project taking a long long time.

Having said that I do tend to work on more than one project at a time. I have a set of Sd Kfz 234/2 Puma Armoured Cars that I bought at SELWG on Sunday and these are calling to me... so much lead (and resin), so little time!
Posted by BigLee at 15:22