Amazingly the Dagenham Dungeon Delvers not only scheduled a game for last night but then didn't cancel at the last minute. Over the last few months our games have been scuppered by a variety of problems ranging from business trips, illness, non existent trains to clashes on our social calenders. I was beginning to think we would never get back into our DnD 4E campaign. After last nights game I think would have been better if we hadn't.

Our GM - the infamous and notorious Evil GM non-the-less - tried to kill us all again. And this time, I really thought the devious bugger was going to succeed. Our Adventuring party had headed into a large and uncharted woodland and almost immediately been attacked by Dryads. We fought off two attacks by nightfall and the following day were ambushed while crossing a deep and fast flowing stream. The battle was brief, one sided and predicable. However the next encounter was not such a pushover.

We entered a clearing which looked like a Charnel house strewn with the gutted and butchered corpses of various forest animals. At first we were ready for action, fully expecting an attack at that moment. But nothing happened initially and we proceeded on further into the forest. We entered another clearing just as a crashing heralded the approach of some unseen creature. A huge Centaur leaped into the clearing and there is a tense moment as both sides size each other up. More crashing and roaring can be heard approaching from the same direction and the Centaur looks back nervously then turns to us and shouts "Run!" before bounding off into the other side of the clearing.


Almost immediately a group of Gnolls burst into the clearing and without hesitation attack us. We are at a disadvantage, strung out and quickly divided we are initially unable to mount an organised defense. The Barbarian in our group is surrounded and soon drops to the ground bloody and unconscious. Then more Gnolls appear and enter the fray. We start hacking our way through the rabid creatures in an attempt to fight our way to our fallen comrade, but more Gnolls pour into the clearing with every turn.

Five waves of Gnoll reinforcements later (five, read em FIVE) and our group is in bad shape. The wizard has been attacked and now lays unconscious on the blood soaked battlefield; the Barbarian has failed one Death Roll and nobody can reach him to confer a healing surge; and the Dragonborn brothers both have Hit Points in single figures. Slowly, very slowly, the battle stabilizes and we begin to pick off the Gnolls. The Barbarian and the Wizard are healed and are able to rejoin the battle and we are finally able to control the battle. Just as victory looks in our grasp the Centaur bursts back into the clearing and shoots dead the last few Gnolls [the "Glory Whore"]. More Gnolls are approaching and we decided discretion is the batter part of valor and retreat from the clearing with theCentaur. 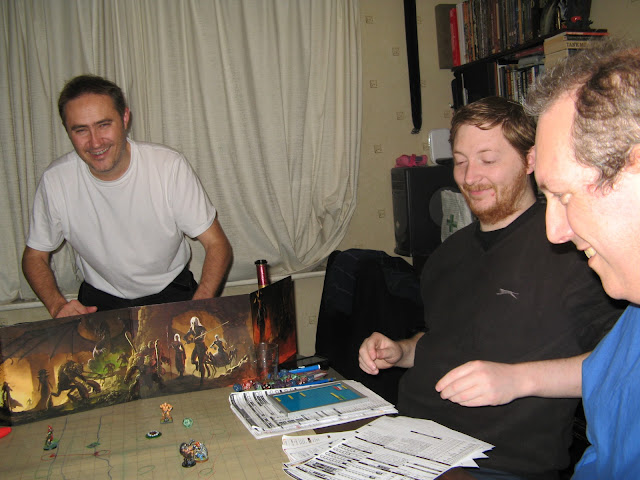 All in all an enjoyable game even if it was a close run thing for us.
Posted by BigLee at 16:59