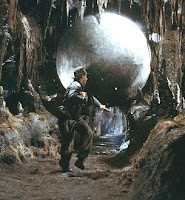 When you think of Booby Traps in ancient tombs and temples the first image that leaps to mind is Indian Jones dodging poison darts, leaping stake filled pits and outrunning a gigantic stone ball. While this was an iconic opening to a classic movie it is, unfortunately, a complete flight of fancy. Or is it?

I recently discussed the myth of the pristine tomb and the fact that over hundreds of years a tomb will be anything other than clean and tidy. Certainly any mechanisms (if they existed) would have long ceased to work. So when a GM puts a trap into a tomb in a roleplaying game it is with a certain amount of willing suspension of disbelief that we accept these adventure elements.

While modern day archaeologists are not in danger from mechanical traps like poison darts and crushing walls there have been a few examples of genuine ancient traps uncovered over the years. These have largely consisted of non lethal obstructions such as stone blocks, pits, false doors and labyrinths. One of the few descriptions of an actual booby trap comes from the time of the first Emperor of China, Qin Shi Huang. His tomb is allegedly protected by hundreds of crossbow traps. Fortunately for future archaeologists (the tomb has yet to be explored) if this description is true these complex mechanisms will have long since seized up and lost their lethality. 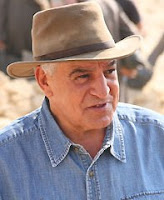 One booby trap that has survived the millennia was discovered in a previously unexplored tomb in 2001 by Dr Zahi Hawass in Egypt's Bahariya Oasis. This consisted of up to 8 inches of finely powdered hematite dust covering the floor and sarcophagus. When Hawass and his colleges first entered the tomb they found that the dust, disturbed by their trespasses, irritated the skin, eyes so much they had to leave the tomb. Excavations were eventually resumed but only after the whole team had donned contamination suits and respirators.

OK this doesn't sound as dramatic as a gigantic stone balls squishing tomb robbers (or adventurous archaeologists) but it would have been none the less effective against ancient interlopers. Hematite dust is the mineral form of iron oxide and in this powdered form the sharp metallic particles can cause Siderosis of the lungs and damage eyes by chemical reaction with tissue. Any grave robber would have found the tomb a very unpleasant place to work and continued exposure over a period of days would result in bleeding eyes and mucus filled lungs.

I can imagine the designer of that tomb - realising he can't stop a determined grave robber -coming up with this devious trap that would ensure that any trespassers died a slow horrible death before they got to enjoy their spoils. In my book that is a nasty trap worthy of the Evil GM himself.