My Great Great Great Grandfather, Thomas Hadley, was an iron worker at the Thames Ironworks in Canning Town. The Ironworks was one of the great employers of the area and was in part responsible for creating Canning Town by attracting skilled labour (including my forebear) into the area. The first Iron Hulled vessel (the Warrior) was built here in 1860 and the ironworks went on to fulfil admiralty ship orders for another 60 years. One of the last great ships to be built here was the HMS Thunderer. 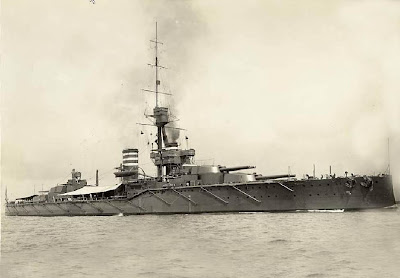 Thunderer was a massive ship (22,500 tons) compared to the Warrior and had to be brought down the Thames to Dagenham - my home town - to be outfitted for active service. She served as Admiral Jellicoe's flagship at the Battle of Jutland on 31 May 1916 taking part in a shelling duel with a Kunig Class battleship that left the latter burning and sinking. The Thunderer ended her days as a training ship for cadets in the 1920's.

Its strange where history takes us. In the early days of Canning Town the area had little or no sanitation, flooded regularly, diseases of poverty such as Cholera were rampant and child mortality was high. I sometimes wonder what my ancestor - someone for whom the rough realities of life would have been evident every day - would think of our relatively pampered lifestyle in the 21st Century. I doubt if Thomas would have had time for such trivial things as Games.