Blast from my Past

I was surfing the Internet the other day and came across this picture of a game from waaay back in my youth.

Tank Commander was a 2 player game made by Ideal Games and released in 1975. The game consisted of a large plastic 'battlefield' with a movable plastic tray onto which the tanks were fitted. Each player had four tanks and the objective of the game was to force the opposing player to retreat into a minefield. Movement back and forth was decided by the use of numbered shells of varying firepower from one to ten. Each player would select a numbered shell and then both would simultaneously flip down the shield of their command bunker to reveal their choice. The winning player would then move the tank slider a number of spaces equal to the firepower of the combined shells.

When an enemies tanks were pushed back into the minefield the opposing player could 'fire' the landmines by pulling a lanyard which caused plastic pegs to pop up out of holes in the game surface. Not exactly high tech but if you pulled hard and sharp enough you could make your opposing players tanks flip into the air in spectacular fashion. 'Destroyed' tanks were then removed from play. I think the game was played over several turns but I can't remember now - after all it was 35 years ago! 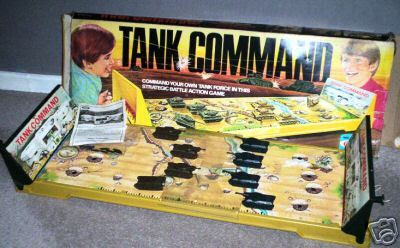 I have to say, basic as it was, I loved this game. It rearly looks dated compared to the toys of today but when I got this as a kid I was in seventh heaven. Maybe my fascination with Tanks stems from this game in my formative years?

Years later, after the game itself had broken, the tanks met a spectacular end in my back yard. I taped bundles of paper Caps (the sort used in Cap Guns) to the front armour and shot them up with an air rifle. Happy days!