I've finally finished a painting project! I'm working on several models at once just to get me back into the swing of painting. Once I've cleared these I'll pick another Flames of War project to paint. This is an old model that I found a while back. I'm in the process of painting several models for a possible Call of Cthulhu game later in the year and this guy is the latest. 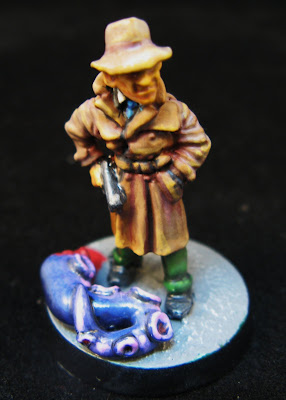 I made a tentacle for the base from some Greenstuff left over from another project. Ordinarily I would have used Milliput which would have cured faster but this did the job eventually. Once I had it made and painted I stuck it on the base. Other than that I decided to leave the base empty, painting it to look like a concrete floor. I'm happy with the overall effect. 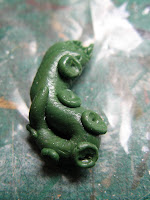 The pictures aren't my best, I really need to think about getting a new camera or at least more lights. But that's a big investment for another year I think.
Posted by BigLee at 09:01