The first Poll of 2010 has now closed and its possible to look at the results. Sixty Eight People responded to the question what sort of games do you play? and the answers are both surprising and what is to be expected. 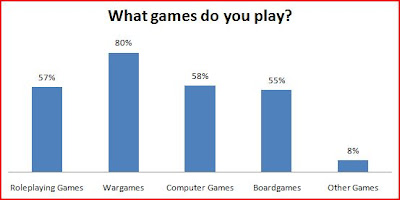 Reassuringly 57% of respondents play Roleplaying Games which isn't surprising given my own bias in the posts I write about D&D and Roleplaying in general. However I was surprised to see that 80% of respondents are Wargamers. Maybe this shouldn't be such a surprise given that I regularly contribute to the The Miniatures Page forum which is itself a largely wargame dominated site. I have had several requests for more Flames of War related posts and I'll try to increase the number of posts I write on this over the coming months.

Perhaps more of a surprise is the fact that 58% of respondents are also computer gamers. I would have thought that a miniatures centric blog such as mine wouldn't appeal to techies but maybe there's more overlap between 'traditional' gamers and computer games than I gave credit for. Maybe one of the factors influencing this percentage is the seemingly ubiquitous nature of 'computer' games at the moment. Many homes have a games system of one kind or another and with the advent of game 'Apps' for the likes of the iPhone and its many derivatives more people have access to this form of entertainment than ever before.

Also interesting was the figure of 55% of respondents that also play boardgames. Again this isn't a miniatures oriented genre but like RPG's and Wargames it is a social activity and therefore has some overlap with these other games. I suspect that many 'gamers of a certain age' remember those heady days when companies like Games Workshop produced boardgames alongside their miniatures and wargames.

Overall these four categories accounted for nearly 95% of the votes cast so clearly there is considerable overlap in interests for readers that took part in the poll. In some ways this reflects the sort of varied material I myself write about. I play RPG's, wargames & boardgames and, on occasion, computer games, so its not surprising that readers of this blog do as well.