This is the first of a new series of posts that I'm calling The Big Picture. Basically every Sunday I'll post a selected picture from my archives. I normally scale down photos for the Blog to save space but for this series I'll post my pictures at the biggest resolution I can, hence the name of the series.
Why am I doing this, I hear you say. Well there are several reasons but its mostly comes down to time. I'm a painfully slow writer and each post takes roughly an hour (sometimes more) to put together, and like most men with chores to do and kids to look after, I often find I just don't have time to sit down and write every day. What I tend to do is try to keep a couple of days ahead of myself with some pre written posts so that at weekends I can use something I prepared earlier (yes, I'm a child of the Blue Peter era!).
As I mentioned in my Showcase article a few days ago I have on occasion spent time blogging when maybe I should have spent time gaming or painting instead. So I made a New Years Resolution to paint more and game more and to facilitate this I need to make more time out of my time. So every Sunday I'll be posting a Large picture and a few words instead of a longer post that I'm maybe I'm not quite happy with.

I took this picture at the Broadsword show in June 2004. The game being played was "War of the Worlds : London Stands Alone" by North London Wargames Group. This game won Best Participation Game at Loughton and Best Created Game at Salute 04. 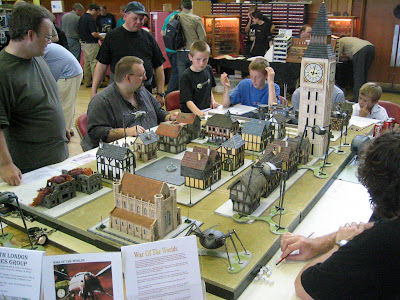