I've started preparing the Forged in Battle tanks I ordered on eBay, but while I was waiting for them to arrive I was working on several terrain projects. One of these was inspired by the excellent article on building an MG Nest featured on Model Dad's. Even if I do say so myself I think the finished result looks pretty good. I'm certainly very happy with this model and I'll probably make a couple more in due course.

My first attempt at building an MG Nest went spectacularly wrong. To use the terminology of D&D it was an Epic Fail. The reason for this lack of success had nothing to do with the guide mentioned above and more to do with my lack of preparedness and being in the wrong frame of mind when I started. After half an hour of cursing loudly all I had successfully managed to stick together were my fingers. At this point I had to retire to the bathroom to apply liberal quantities of acetone based nail varnish remover to my fingers to unstick myself.

My second attempt couldn't have been more different. I cleared my work area before starting, gathered all the tools and materials I needed and only then did I start. I cut cocktail sticks with a pair of clippers and trimmed the edges with a modeling knife to tidy them up a little. I used superglue for speed but placed the 'logs' using tweezers rather than my big chubby fingers. Then I carved the earthen banks from some polystyrene packaging and glued them onto the base using a simple contact adhesive. The log roof was similarly fixed into position using the same glue and the allowed to dry. 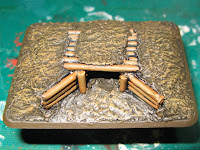 I then built up the earthen bank using a special mix of quick drying plaster. I use this material to cover infantry bases and it dries quite strong and resilient. I mixed in a little gravel for texture and some dark brown paint (if the dried plaster chips it'll still be brown all the  way through). What I ended up with was a mixture that had the colour and consistency of dog poo but was sticky enough to be easily applied to the model and then shaped and sculpted as desired.

I allowed this to dry for 24 hrs before painting and applied a generous coat of base black to make the surface more resilient. Similarly when painted I applied several coats gloss varnish to strengthen the surface before covering with Dull Coat varnish. The last stage was to apply the grass. 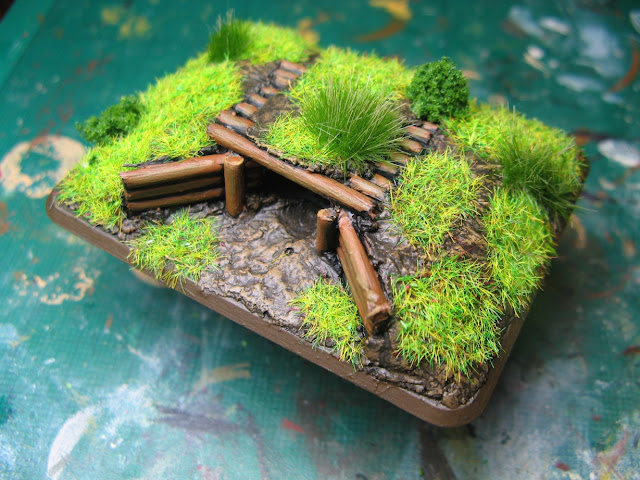