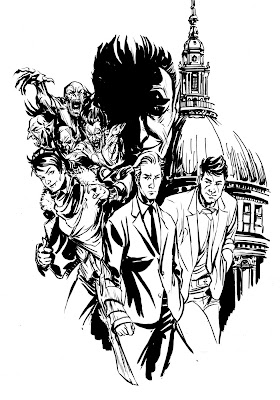 I've written about my enjoyment of Webcomics several times on this blog. I've never been a big reader of the traditional printed version (except as a kid) but I have enjoyed following several on the Internet over the years. Now Dave Stokes of the Dagenham Dungeon Delvers has started his own Webcomic called Blackfriars. The first two pages of a prologue story are now available to view and so far I think its looking pretty good indeed.

Here's the lowdown in Dave's own words. "It’s a contemporary fantasy story set in present day London about three unlikely heroes, an ancient threat from Britain's mythic past, Magick as a secret resource of the British Government, all converging on a long-lost gateway to the Fey realm situated in the tunnels of the London Underground beneath St. Paul’s Cathedral... As if rush hour wasn’t bad enough."

Dave did a lot of research before starting on this project and this clearly shows in his work. At last years British International Comic Show he was able to pick the brains of professionals like 2000AD artist PJ Holden. His advice helped convince him to get started on his own comic. Dave claims to be no good at drawing architecture, but I think you'll agree these first few pages are excellent.

You can see more of Dave's amazing artwork on his other site, Dave Stokes Sketch Blog.
Posted by BigLee at 09:01