Pillbox and other stuff

I've been working on some more of the scenery items I bought at Cavalier a couple of weeks ago. In the process I have learned an important lesson about the dangers of buying in a hurry and full of adrenalin! Before the show I had made a list of items I wanted to get and a list of traders I knew made these items and more importantly would be at the show. On the whole this was a successful strategy, but I made a few 'dodgy' purchases non-the-less. 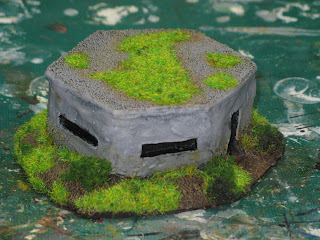 One item I bought was a 15mm hexagonal pillbox from TSS, the same company that made the Dragons Teeth I was so happy with earlier in the week. I know from experience that resin models can vary in quality enormously but when I opened the packet I was shocked by what I found. The basic construction was strong enough with a separate roof and moulded base but the quality of the casting was appalling. The roof in particular was horrendous. It consisted of an uneven and wonky hexagon of resin that no matter how I tried to align it just didn't match the shape of the pillbox building. It was twice as thick at one end than the other and looked like an off cut (I know resin isn't cut, but that was the first impression I had).

In the end I decided to make my own roof for the pillbox. I marked out the correct shape (using the pillbox as a template) on a sheet of thick (2mm) plasticard. I cut it out and then trimmed the edges make it a better fit. I decided to glue the roof in place and used Milliput putty to seal any gaps. I also glued a scatter of sand on the roof to simulate a rough concrete finish. Painted and dressed with vegetation I don't think its come out too bad.

I'm currently working on another objective marker, this time using a spare Stug vehicle I found in my bits box. I've started some conversion work so that I can paint it up as a knocked out vehicle. This is still at the early stages but I'll post pictures when it's completed.
Posted by BigLee at 09:01