Another day, another terrain piece completed. I bought this Pond (made by TSS) at Cavalier a couple of weeks ago and have now completed it. However it wasn't a straightforward job and took a lot longer than anticipated. 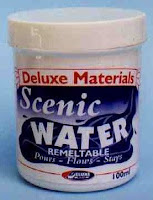 The 'water' was a big problem as I just couldn't get a decent flat surface on it. Even after base coating I found that any consistency of paint 'pooled' on the surface, even when flow improver was added to the mix. This meant that it took several coats of paint to get good coverage and resulted in a 'lumpy' surface that just didn't look like water.

I tried using a product I bought a while ago (but havn't had an excuse to use until now) called 'Scenic Water'. This product is a meltable jelly that can be poured and shaped as required. But what I didn't realise was that when it cools it remains in a jelly like state. Once set it looked truely terrible and didn't even provide a shiny water like shine to the surface. This was the first time I used this product, and it'll be the last time as well! In the end I was forced to strip the whole model and start again.

Second time round I still had problems with paint coverage but I tried to keep coats to a minimum, allowing each to dry thoroughly before moving to the next stage. I then used three very thin layers of Winsor and Newton Gloss Varnish to give the surface a shiny 'wet' look. The final coat took over 24hrs to dry fully so this was a very slow process on what should have been a simple paint job. 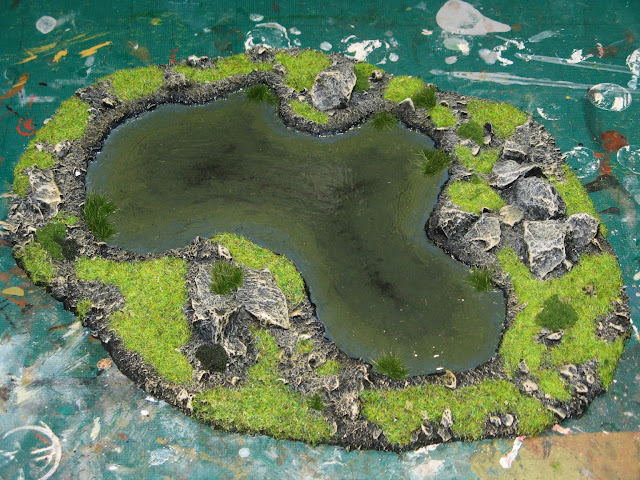 Despite the problems I'm reasonably happy with the finished piece. I used some of the grass 'tufts' I bought at Skirmish and I think they make a lot of difference. However for such a 'simple' piece of terrain it gave me a lot of grief and I'm glad to move on to other projects.
Posted by BigLee at 09:01