First Blood with Flames of War 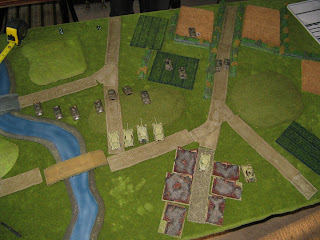 After nearly two years painting and collecting I have finally been able to get a game of Flames of War with my good friend and Brother-in-law, Raymond. This was his first wargame and one I think he'll remember for a long time.

For our first game I decided to keep things simple and use just tanks. This way we could avoid dealing with the Assault or Artillery rules until we had the basics under our belt. I made up an order of battle for both sides based on the models I had available, trying as best I could to balance the forces. Ray took control of a Tank Company from the 2nd Armoured Division (Hell on Wheels) while I faced him with my Lehr Panzerkompanie. The order of battle was as follows: 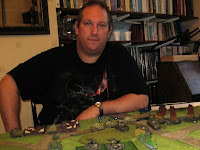 I was outnumbered 2:1 but I also knew that the guns on the Sherman's were no match for the frontal armour of my Panthers. Plus while I had a working knowledge of the rules - and experience of many different wargames - my opponent was the ultimate newbie, a veritable wargaming virgin.

I set up the battlefield and then Ray chose which side to play. We didn't bother with a scenario or objectives as the primary aim of this game was to learn the basics, movement and shooting. It would be a straightforward battle to the death. I tried to put a variety of terrain on the field while not cluttering it up too much. I certainly didn't want to put Ray off by thoroughly confusing him while I thrashed him soundly. As it was neither event happened. 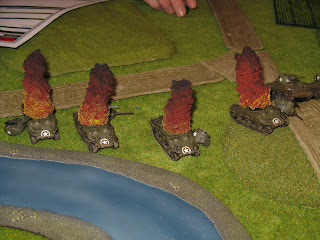 The setting for our game probably wasn't the best for a 'lets learn the rules' session. For a start my table was too small (we played on a 3x6 surface) so there was actually very little room for maneuver. Also we had family over in the afternoon so the house was busy and noisy. Then a group of my daughters friends turned up. So while we tried to concentrate and work our way through the rules we had to do so to a backdrop of bedlam, riotous noise and continual interruptions.
As already mentioned the table was far too small (I need to figure out an alternative for future games) so the first turn of movement brought our respective tanks almost nose to nose. Ray did exactly what I thought he would do and basically charged his mass of Sherman's straight at my panthers. So for the first two turns all that happened was that his shots bounced off my frontal armour while I picked off his tanks one by one. 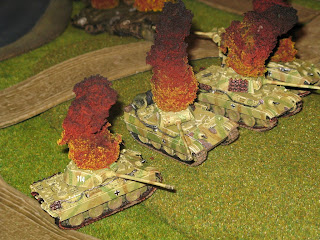 Things changed when I finished off the platoon on my left flank. I thought the game was wrapped up so I moved my panthers onto a hill in the center and turned to face the remaining Sherman's. But this gave the American M4A1 (76mm) Sherman's a chance to swing round my flank and hit me with a series of side shots. Yes he was very lucky with his dice rolls but I should never have given him the opportunity to hit me in the flank. In just one turn the advantage shifted and soon I found myself down to one Panther facing 5 Sherman's, three of which had the 76mm gun.
That was it for me, and the game ended with the destruction of my lone Panther in a hail of fire from the US Tanks. I was a little miffed at loosing but on the plus side I think Raymond had a great time and will definitely come back for more games. He literally pulled victory from the jaws of defeat and earned himself some well deserved battle honors.
Tomorrow I will be posting a Tutorial on how to make the Smoke and Flame markers seen in the above pictures.
Posted by BigLee at 09:01