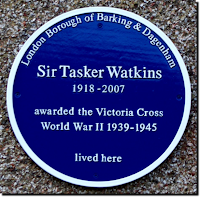 I made an interesting discovery last weekend while taking my daughter over the local park. On the front of one house across the road was a new looking Blue Plaque. London's blue plaques scheme was founded in 1866 - it is believed to be the oldest of its kind in the world - and are usually placed to commemorate the link between notable figures of the past and the buildings in which they lived and worked. This particular plaque honours the former Dagenham resident Sir Tasker Watkins.

Tasker Watkins was born in Wales but lived in Dagenham for 15 years until the end of the War. He was awarded the Victoria Cross for bravery in north-west Europe in August 1944. The Plaques page on the local council website has the following details: 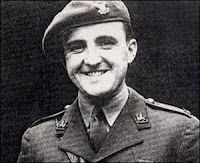 "Sir Tasker Watkins was a lieutenant in the Welsh Regiment in 1944. His company came under heavy fire as they crossed a cornfield full of traps. There were many casualties and Tasker was the only officer to survive. He charged two machine-gun posts, disabling them, before coming upon an antitank gun manned by an enemy soldier. When his rifle failed, he threw it in the soldier's face and shot him with his pistol

Backed by 30 men, Watkins charged against 50 enemy infantry. At dusk they found themselves surrounded, but the order to withdraw had not reached them because their wireless set had been destroyed. Tasker led his men round the flank and was soon challenged by an enemy post at close range. He told his men to scatter and charged the post with a Bren gun, taking it out of action."

Watkins' Victoria Cross is on display in the Lord Ashcroft Gallery in the Imperial War Museum.
Posted by BigLee at 09:01