My friend Derek (aka DJK) has earned himself a very honorable mention today because he bought me not one but three books. He told me he had something for me earlier in the week but I'd forgotten all about it. So when I picked him up prior to our D&D game on Friday it was with some surprise that I was given this unexpected gift. I've had a chance to scan through these now so here's what I got. I think you'll agree he was very generous indeed. 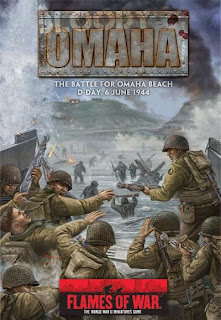 Bloody Omaha Flames of War Sourcebook - Clearly my enthusiasm for FOW and the Normandy campaign have been communicated well because the first of the books is one that I have been pondering buying for some time. Also in light of my recent adventures in the digital realm this part of the massive allied Overlord invasion holds a particular interest for me.

The book includes a detailed history of the Battle for Omaha beach which became the bloodiest landing of all the D-Day beach assaults. Period photographs and color diagrams make this an exciting and enjoyable read. Also in the book are army lists for creating German defense forces and assaulting Americans from the US 1st 'Big Red One' and the US 29th 'Blue and Grey' Infantry Divisions.

I'm particulaly looking forward to constructing some of the beach defenses illustrated in this book. I also found the section of fortifications interesting and I can see these rules being useful in a variety of games. 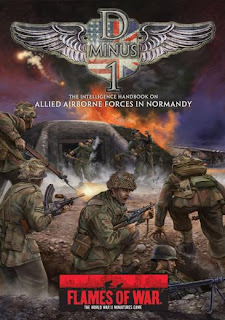 D Minus 1 Allied Airborne Forces in Normandy - The second book was another FOW source book this time focused on the Airborne units dropped on France ahead of the main beach landings. The extensive use of Paratroops from the British 6th and US 82nd and 101st Airborne Divisions certainly made success on D-Day possible.

My Brother-in-law in particular will be very excited to read about the 101st and I may have trouble stopping him from rushing out and buying a force immediately. He has a large selection of memorabilia linked to this unit both original kit worn in Normandy and replicas used during the filming of Band of Brothers. To say he's a little obsessed does OCD injustice. His 'office' at home is like walking into a museum with every inch of space filled with display cabinets holding a wide array of interesting items. If he starts buying models not only will have have nowhere to store them but his partner will probably skin me alive!

Modelling Armored Vehicles - The third book is an Osprey Modelling Guide and looks at scratch building models of a range of armored vehicles. Although I'm not likely to build myself a 1/35th scale tank many of the skills and techniques used are interesting to read about. I'm sure some part of the advice demonstrated in this book will find its way into my modeling at some point in the future.

One of the things I like about this series of books - aside from the high standard of writing expected in all Osprey's - is the opportunity to see how other painters and modelers work. This book has contributions from several scale model builders and each have personal tips and techniques that come across in the different projects described.

Three books out of the blue - Its like Christmas has come along all over again! Derek told me it was the combination of good timing (being in the right place at the right time to take advantage of a special offer) and a thank you for being the groups 'designated driver' and regular game host. It's nice to be appreciated - especially with gifts - but I have to say it was completely unnecessary. If hosting a few games and driving to others helps facilitate games its the least I can do. Having said that getting these books has put a big smile on my face, and that's always a good thing. Thank you Derek.
Posted by BigLee at 09:01