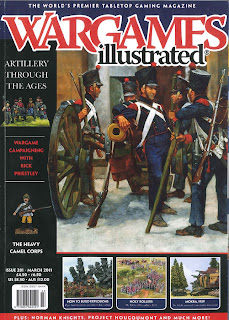 One of the best things about being a subscriber to a magazine is receiving it before the issue is released in stores. I always enjoy that feeling of 'privelaged access'. Of course I'm no more privileged than thousands of other subscribers but it's a nice fantasy to indulge!
The Theme of this months issue makes a break with the 'period' themes of the past year or more and instead focuses on artillery through the ages. I wasn't sure I was going to enjoy this theme but having now had a chance to sit down and read through this issue I have to say I have changed my mind.
All in all a pretty good issue with plenty to whet the appetite and excite the imagination.


I thought I would post some statistics about this issue like I did for WI 280. All percentages are rounded to the nearest whole number.