During the WWII reenactment that took place at Military Odyssey over the weekend they had an L-4 Piper Grasshopper spotter plane buzzing the battlefield. I managed to get a few seconds of video and thought it worth sharing.

The Piper Grasshopper was a well established civil airplane at the outbreak of the war and was ideal for service as a reconnaissance plane. It had a wingspan of 35 feet and weighed a measly 553kg. It could take off from a very small runway and cruised at a maximum speed of 85mp and maximum ceiling of 9300 ft (with a crew of two). 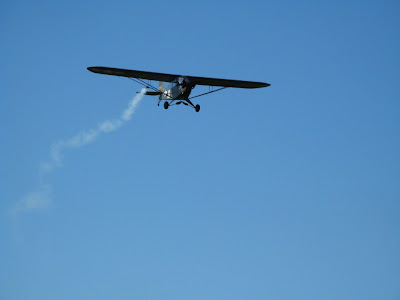 The Grasshopper saw extensive service in Normandy but they were also used in North Africa and the Pacific.
Posted by BigLee at 08:01