The River Styx separates the world of the living from the world of the dead. It is said to wind around Hades (hell or the underworld) nine times. Its name comes from the Greek word stugein which means hate. Styx, the river of hate. 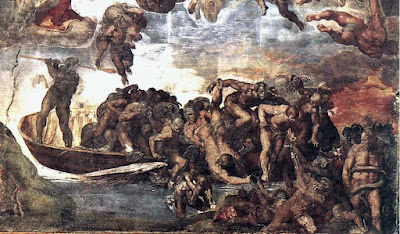 In my recent D&D campaign my players were given the chance to enter Hell and ultimately cross the river Styx. I took a lot of inspiration from the works of Dante and Gustave Dore. The picture above, the Last Judgement by Michelangelo shows the darkly gaunt and tortured souls as they leave Charon's ferry and spill upon the shores of hell.
I already had a model (the Reaper model Charon sculpted by Bob Olley) but needed the most important character in the encounter...the river itself. I wanted a setup that would leave the players in no doubt what sort of river they were crossing. I eventually found an excellent artwork which (with some digital manipulation) could be adapted into a suitable river surface. I was rather pleased with the finished river and the picture below is the result. Email ThisBlogThis!Share to TwitterShare to FacebookShare to Pinterest
Labels: DnD, Myths and Legends