I've just finished reading Das Reich by Max Hastings. This 290 page paperback is part of the Pan Grand Strategy Series and was first published in 1981. The book is ostensibly about the march of the 2nd SS Panzer Division (the Das Reich) from their base in the south of France north towards Normandy in response to the D-Day Landings. The story that unfolds within its pages however is much more than this simple tag line suggests. 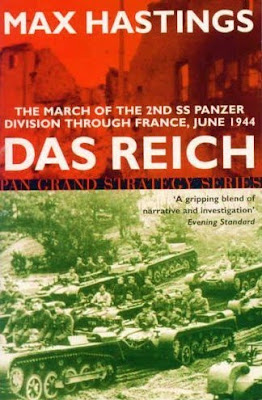 From the outset this book is more of a review of the role and nature of resistance in the liberation of France. The layman's view (the 'myth' even) of the Resistance is of a single unified Secret Army fighting the Germans at every step and helping to win the freedom of their country.

The Reality portrayed in this book is significantly different. Firstly the resistance groups themselves were fractured and untrained. For instance the AS (Armée Secrète) distrusted and hated the FTP (the Communist Maquis) and visa verse. Even within these groups resistance cells were disconnected and sometimes openly hostile to rival groups. More importantly the vast majority of Resistant's in both groups were I'll equipped and generally lacked basic training throughout the war.

There were individual cases of resistance causing severe loss of material or resources to the occupying Germans. But overall the impression the book gives is of an undervalued (by regular military leaders) asset that was more of an annoyance than a real threat to the Germans. This situation was not static however and the value of resistance grew from D-Day onwards with substantial damage being caused to the rail network for instance.

This book however focuses on the actions of the AS, FTP, external agents from London and even units of the SAS in restricting the movement of the Das Reich as it lumbered north to meet the Allied invasion. Without their action the 2nd SS Panzer division may have been able to deploy in the Normandy area within 72 hours of orders being received. In reality the Das Reich deployed over two weeks after the order to move was given. However the cost to the local populations was often summary and brutal - such as the Massacre of nearly 650 civilians in Oradour-sur-Glane.

This book is a gripping read from the first page to the last and is an incredible insight into the effectiveness of irregular warfare and the brutality of German reprisals.
Posted by BigLee at 10:30