I'd like to start this post by stating that I am a serious gamer, honest. But I'm also a father and occasionally I have to play games that wouldn't normally recommend themselves to me. This game (ages 6+) is definitely one of those games. I have to grudgingly admit it was fun to play but that might have more to do with my opponent than the game itself. .

My youngest daughter (the new Padawan Learner now that my eldest has grown into a Jedi) got this for her birthday and needed a willing opponent, preferably one that would let her win (she's not daft you know). The game is basically a supermarket trolley dash where each of the Mystery Incorporated team need to find four items while being chased by monsters. That pretty much sums up the game and the rules. 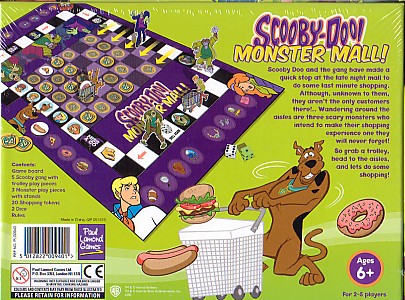 Published by Paul Lamond Games Ltd in 2010 this is firmly marketed at very young players (hence the target suggested age range) with very simplistic rules and card stock counters. It also comes with two coloured dice and a fold out game board.