Continuing the occasional series of pictures of Toy Soldiers. 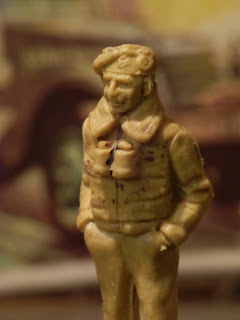 This is a 60m plastic Cherilea toy soldier and probably dates from the late 1960's-1970's. The moulds were reused for a long time and many were sold off so it is hard to pin an exact date on this particular figure. It was part of a range that included assorted figures of soldiers from the British 8th Army in North Africa. Its unclear from my research if this design was sold as a direct representation of Montgomery but the distinctive beret with two cap badges make it clear who it was modelled on.

The company of Cherilea originated in the mid 1940's in Burnley, England and was formed by Wilf Cherington, a former designer for the noted toy soldier manufacturer John Hill and Co. Like most toy soldier manufacturers of this period he originally produced figures in lead but later moved into plastics in the 1950's. The quality of Cherilea figures can vary a great deal with the earlier stuff being the best. Original figures were sold painted but as this example shows paint adhesion to the polyethylene plastic wasn't good.

Cherilea made figures in a range of scales including 30mm, 40mm, 54mm and the more common 60mm which eventually became their standard size. Earlier examples of the 60mm rectangular base figures have an easily recognizable base-mark - shown here on the left. Later castings (where the mould had been reworked) may not have the mark.

This particular figure can be seen at the House on the Hill Toy Museum in Stansted Mountfitchet.
Posted by BigLee at 06:54