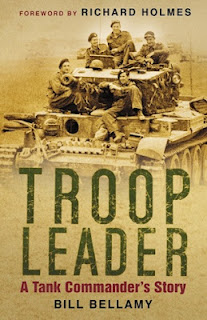 Troop Leader: A Tank Commanders Story by Bill Bellamy is one of the better first person accounts I have read of the campaign in NW Europe in 1944-45. Against all the rules he kept documents, letters and diaries of his experiences and the reader can only approve of this mild act of rebellion because it has resulted in such an excellent book. But unlike the big scholarly works of historians like Keegan, Ryan and Hastings this book is more concerned with the minutiae of day to day life as a Cromwell troop commander.

Bellamy's style of writing is very easy to read, sincere and engaging without being overly simplistic. His descriptions are interesting and have an immediacy that probably comes from his extensive notes and diaries written in the field. There is very little 'action' in his story but that never detracts from the pervading sense of danger that he and his men lived with all the time. Time and again Bellamy recounts yet another friend or college killed in action and each time it is shocking for its complete randomness. Death could come to anyone at any time and crews came to terms with the danger in their own way.


One amusing an enlightening anecdote illustrated the speed and agility of the Cromwell over other allied tanks. In Holland his troop of tanks pushed through a hedge only to find themselves right in the middle of a German division armed to the teeth with Panzerfausts and AP guns. With a quick burst of MG fire the Cromwell's roared into reverse and made off as fast at they could across a wide open field. With AP rounds chasing them all the time the only escape route was across an elevated drainage Dyke. So they gained as much speed as possible, hit the sloping dyke wall and jumped the 20' of water to the other side!!

Towards the end of the war His mother was killed by one of the first V1's to hit London. When he returned to his unit after the funeral he was understandably full of hatred for the Germans. But his humanity soon returned as his regiment moved into Germany and he began to see the terrible devastation of towns and cities, especially Hamburg which made a big impression on him.


I found his description of the closing stages of the war and the early occupation in Berlin particularly interesting. One gets the impression from his words that he felt that the Allies had removed one evil regime and handed it to another. Initially he was open minded about the Russians, being admittedly ignorant (in his words 'naive') about politics. But first hand experience of the Russian occupiers of Berlin changed his mind and he was revolted at some of the things he saw.


This is a very interesting book precisely because it does not look at the 'big picture'. Bellamy's style of writing is both engaging and entertaining and he knows how to tell a good story. As with many of these memoirs of wartime service it gives a uniquely personal view of the campaign to defeat the Nazis and liberate Europe.
Posted by BigLee at 08:25