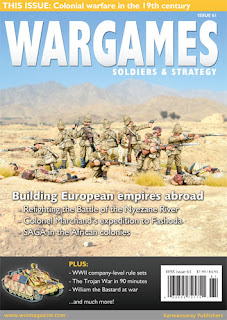 No sooner had I finished reading my copy of Wargames Illustrated last week when my other subscription arrived on the doormat. WSS 61 has a colonial theme this month and features on its cover a dramatic diorama of  'The last eleven at Maiwand' by Andy Hawes.

Colonial games do have an appeal for me, probably because I grew up watching great films like King Solomon's Mines, The Four Feathers, Zulu, Lawrence of Arabia and The African Queen. And in recent years there have been some amazing miniatures on the market that have made playing this 'period' do-able for the average wargamer.

This issue has several great articles to tempt the weak willed wargamer such as myself. Mike Evans article A beginner's guide to Colonial wargaming - four feathers and a bucket of dice is a great introduction. Following on Andy Miles Terribly Earnest Work looks at how to re-fight the Zulu War battle of the Nyezane River in 1879. And Mark Backhouse, writes about Adapting SAGA for the great plains of Africa - Colonial SAGA.

Outside the theme there are also several other articles that I found not only interesting to read but add real weight and authority to this publication. Rick Priestley's ingoing column This Gaming Life discusses what he calls The Great Wargame Schism; the divide between Historical and Fantasy wargaming. His argument that essentially its all the same will shock and horrify some and reassure others.

Another article I particularly enjoyed was Joe Legan's In Defence of 15mm. Personally I didn't realise this scale needed defending but he does make a good point that 15mm is more economical to play and provides for larger battles. Maybe its not everyone's 'cup-of-tea' but since I have been with Posties Rejects I have rarely played a game outside this scale and I'm a very happy convert.

There is plenty more in this issue including the usual miniature and product reviews which make this an all round read and an essential part of my hobby experience.
Posted by BigLee at 09:31