Back at SELWG in October I bought a couple of the plastic Zvezda 1/100 vehicles including a German Panzer III and a Russian T34/76. These sets are very cheep and easy to assemble and the quality of the casting is excellent considering the price range. I didn't buy either model for use in an army, I just thought I'd give them a try-out to see what they were like.

To be honest I sort of forgot I had them so when I uncovered the two boxes yesterday I decided I had found something to keep me amused during my lunch break. I've only assembled the T34/76 so far but I have to say I'm impressed both with the detailing on the model and its easy of assembly. I used clippers to remove the model from its sprue but that wasn't really necessary and a quick scrape of a fingernail removed the small amount of tailing where the sprue met the model.

The range is focused on Operation Barbarossa so is firmly an early war collection of vehicles for the game Art of Tactic. Other models in the 1/100 range include: 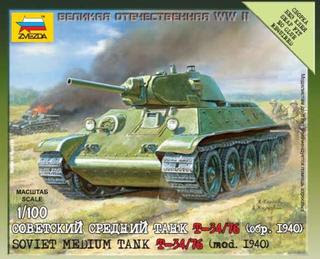 
I haven't considered whether to paint this model yet, but as a quick diversion it fitted the bill. And at just £2.50 each I can see how they could easily be used to build a cheep force to start off a Tank Company or two. I may buy several of the German Opal Blitz trucks next for use as scenery or objective markers.
Posted by BigLee at 17:10