Over the last couple of weeks several Bloggers I follow have been posting a thread called Playing Favourites. Basically is a list of categories and an excuse to show your inner geek, so how could I resit joining in! Check out some of the other posts on the following blogs: Trouble At T'Mill, Mylardiesgames, Too Much Lead and Steve's Random Musings. So here's my humble contribution:


Wargames Period - Easily WWII - no surprise there - closely followed by ACW. I'll happily play any period but I have a particular interest in the history of these two conflicts. 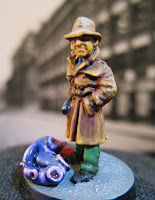 Scale - I'm a recent convert to 15mm for wargaming although I'd prefer 28mm for RPG's and skirmish type games. This is the scale I 'traditionally' painted but as I said I have been doing more and more 15mm in the last few years. Also thanks to Posties Rejects I have had a chance to play a wide range of games in 15mm over the last year and as a scale it is growing on me. I'd like to give smaller scales a try in future (10mm and even Micro Armour 1/200th) but I'm reluctant to branch out onto yet another game and set of models.


Rules - I don't think I'm qualified to answer this, because my experience has been limited to just a handful of  game systems. Generally I prefer simpler rules that allow the player to concentrate on strategic thinking rather than maths. I'll be honest, I find it hard to read rulebooks, no matter how many pretty pictures they include. I much prefer to learn at the elbow of an experienced player and as I don't belong to a club the only rules I have read are those I have bought for myself.

Boardgame - I haven't played Risk in years but as a teenager it was by far my favourite. Nowadays I think my favourite is probably the old classic, Chess. I'm useless at it but I regularly play on my Smartphone or PC and the beauty of playing a 'computer' is that I can turn down the IQ of the AI until I win (!!). Actually I win about 50% of the time so I still consider a game challenging enough to be enjoyable but not an exercise in self punishment.


Figure manufacturer -I love the 28mm miniatures of Heresy and Hasslefree. In 15mm I don't really have a favourite as I tend to buy from a wide range of manufacturers based on what I need from wherever it is available.


Metal/Hard Plastic -The quality of resin and plastic has improved hugely in the 30 years I have been collecting miniatures. I prefer Metal but if I need a particular figure, what it is made of is secondary to how it looks, what it costs and how easily available it is.


Club -I've never been a club man myself. Partly because for years there wasn't one local to me and partly because I'm not a naturally gregarious person. However I've now joined Posties Rejects which I suppose is a sort of unofficial club so I'll nominate them in this category.


Opponent - My mate Peter (aka The Evil GM). We haven't faced off in a wargame battle for over 20 years but one day I'd like to beat him, just once. To my knowledge he has never been defeated in a wargame - the git - so victory against him would have to go down on my personal Bucket List. The chances of it happening though are vanishingly small because I have the tactical ability of a peanut and Pete is simply the luckiest SOB I have ever had the misfortune to meet in combat.


Film - I loved films like Zulu and The Longest day when I was a kid and they still inspire me today. But I have to say I'm excited by the opportunities that CGI have brought to modern war films like Saving Private Ryan, Enemy at the Gates and the HBO Series Band of Brothers and Pacific. Ironically I thought that CGI would also revive Fantasy movies finally bringing them the visuals that often lacked in older films. With the exception of the LoTR trilogy I can honestly say I have largely been disappointed on this front!

Book - I'm going to be boring now and say The Lord of the Rings and the Hobbit. Closely followed at the opposite end of the literary scale by the Conan stories by Robert E. Howard. However for pure inspiration I'd have to nominate Bury My Heart at Wounded Knee as a history book that literally changed my view of the world.


Art - Considering my book choices it should come as no surprise that I love the artwork of Frank Frazetta. I'm also a fan of the work of my mate Dave Stokes whose artwork has been featured here several times. Also I have to nominate the photographer Robert Capa in this category as well as I consider his pictures not just brilliant but works of art in their own right. His pictures of D-Day send a chill down my spine.

The Interweb - I live my life on the Internet. When I'm not working I spend an inordinate amount of time on social networks, blogging or reading other peoples Blogs and generally surfin' the web. Consequently I honestly can't pick out a single site or blog for highlight because I love it all (ahhhh).


I hope you like some of my choices and I'm sure the moment I publish this post I'll think of several dozen new things I wished I had included. So what about you? Fancy picking up the baton and listing your Favourites?
Posted by BigLee at 17:01