First game of the year!

The irony of the fact that I'm writing about my first game of 2012 at the end of January hasn't eluded me but needless to say all our group have busy or unusual jobs and getting together is a challenge at the best of times. First let me start by saying that the Dagenham Delvers gathered for a resumption of our D&D campaign after a prolonged Christmas break. Longs gaps between games are very difficult, especially when the games form a sequence and there is a story to follow. Fortunately we keep a detailed campaign Journal and were able to pick up quickly from where we left off. 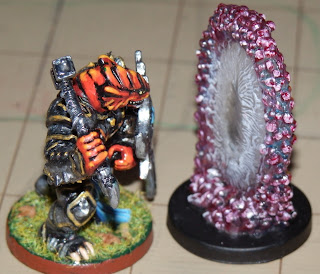 This game saw our party of adventurers begin by fleeing the scene of our last battle with the Gnolls of the Valric Forest. Heavily outnumbered and seemingly surrounded we ran as fast as we could to reach the nearest Sealy Hill (these are semi mystical hills with links to Fey magic). We managed to stay ahead of our pursuers - just -and made it to the crest of the hill in time to see the Gnolls massing on the treeline surrounding the hill. On top of the hill was a large stone altar stone, but little else by way of defensive terrain. We searched the hilltop in desperation and found a rune or glyph etched into the side of the stone which when pressed opened a secret stairway leading down into the hill.

With little other option we proceeded down and closed the doorway behind us. However we soon found that we were in a small series of chambers, rigged with explosive traps and no exit other than a disabled Portal with the keystone missing. Next to the portal stood twelve chests made from various materials including wood, metal and stone. Each had a lock or mechanism and one possibly held the missing keystone. After tripping one trap we immediately suspected more traps when we found a garbled note next to the Portal. It was a message, clearly in code and maybe it held a clue to the location of the keystone.

The coded message kept us happily occupied trying to decipher it for at least 20 minutes and eventually we were able to locate the keystone just as we heard the Gnolls opening the secret doorway to this underground chamber. We passed quickly through the portal and removed the keystone on that side thereby deactivating it and blocking our pursuers. Of course this also means our route back is blocked so we have little option but to go where the Evil GM directs us! 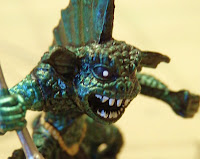 Our group explored the underground rooms we appear to have entered looking for a route out but eventually could only find a spiral staircase leading down into a series of flooded rooms. With little other option we decided to swim through the flooded section to reach another series of rooms above the water level. However we never expected this short swim to be uneventful and true to our expectations we had to fight some bad tempered Sahuagin before making it to safety.

All in all a pretty good game with an interesting mix of puzzle solving, skill challenges and combat.
Posted by BigLee at 06:30