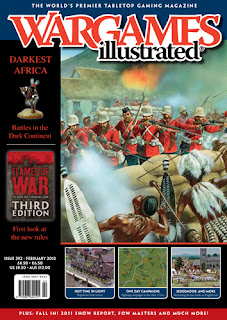 The new hardcover rulebook will be bigger (308 pages) with two separate softback booklets covering army lists and the hobby aspects of the game. Its not clear yet if these will be sold individually as I suspect that most existing FoW players won't need a booklet detailing the basics of how to paint their miniatures. Similarly the Forces book will probably be redundant to most existing players. However the new and updated core rulebook does look really good from the sneak previews shown in here. The article has certainly whetted my appetite and I am looking forward to getting my hands on the new Flames of War rules to see in detail what changes have been made. 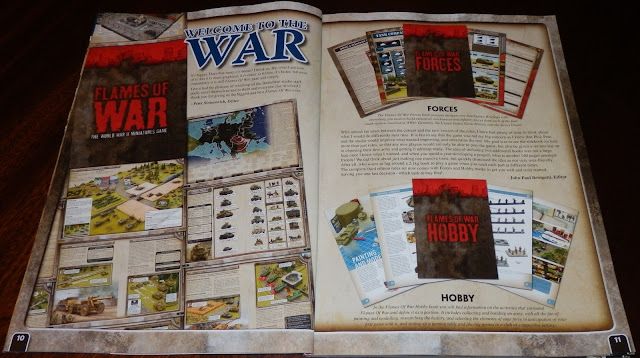 Leaving the preview of the new rules aside this is still a great issue, focusing as it does on the increasingly popular Darkest Africa 'period'. This genre covers a wide swathe of history and a diverse selection of minor and major wars from colonial skirmishes, inter-tribal warfare, the campaigns against the Mahdi through to the Zulu War of 1879. The opening article in this themed issue is written by Chris Peers (author of In the Heart of Africa and Death in the Dark Continent) and gives a good overview depth and choices in this period. [If this looks like a period you are interested in check out the excellent Blog Return to Darkest Africa]

There is also an excellent Battle Report by Rick Priestley called The Path of Blood! This focuses on the revolutionary Zulu leader Shaka Zulu and the period that would later be called the Mfecane - The Crushing - when Shaka forged what would become the Zulu empire of southern Africa. In this battle the Zulus face off against the Matabele in an epic inter-tribal battle for domination of the northern portion of the Zulu sphere of influence. The pictures and write up of this game are excellent and very evocative. A few years ago such a battle would have been much harder to stage as there just wasn't a wide enough range of miniatures with which to field two such large armies. However with the recent advent of plastic box sets like those by Warlord games this has now become a much more realistic option.

As well as the themed content there are several other articles covering other periods that are equally interesting such as Hot Time in Ligny and Segemoor and More. There is also a really nice photo report from Fall In 2011 and a report from the Flames of War North American masters tournament.
Posted by BigLee at 14:47