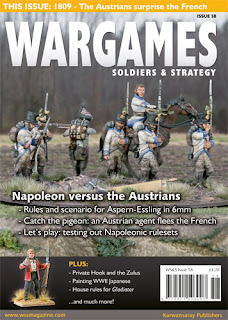 Last weekend I picked up Issue 58 of Wargames Soldiers and Strategy and it was so good I've nearly finished reading it already. As usual this issue is dedicated to a theme (this month its Napoleon versus the Austrians) but also contains a range of other excellent articles, news updates and figure reviews to round off the content. Full details can be found here but the following articles in particular caught my eye.

Rick Priestley's excellent feature column This Gaming Life continues with a look at the much maligned mechanic IGOUGO. Once again Rick shows the depth of his knowledge and experience in providing a well rounded article discussing the relative merits of this sometimes controversial rule convention and its alternatives. With each article I read by Rick it becomes clearer and clearer that his understanding of wargaming is not just limited to those games he has had a hand in developing.

Another great article is Mark Blackhouse's You are no good Private Hook! Recreating the battle for Rourke's drift in 1:1 models to participants is clearly not practicable except maybe for large clubs, so Mark instead focused on action inside the hospital. His scratch built building was simple but effective and I could instantly see several applications for the model created.

The article Soldiers of the Imperial Army in the Pacific - Painting WWII Japanese by Helen Bachaus was also very interesting. In it she looks at Japanese uniforms from WWII. I've not seen these focused on for a long time and I thought it was a very interesting and informative article as well as being illustrated with some excellent photo's.

Richard Clark and Nick Skinner (Two Fat Lardies) also gave an interesting interview to the magazine about the latest edition of their WWII Company level wargame I ain't Been Shot Mum. The more I read about this game the more tempted I am to buy a copy just to check out the rules. I'm not the sort of gamer who finds rule-books easy to read - I much prefer to learn by playing the game - but various other reviews I have read say these are an easy and fun set of rules to learn. Obviously I've committed myself pretty heavily to Flames of War but I 'm beginning to think it would be useful to expand my understanding of other rules systems for the same period.

This magazine is definitely growing on me and I am seriously considering taking out a subscription so I don't miss future issues.