We Were Newbies Once... and Young

New players are the lifeblood of our hobby. Whether it be wargaming or a roleplaying the game cannot survive indefinitely without new recruits to fill the ranks as us 'experienced' players get older. But introducing a new player to an establish group is fraught with difficulties and uncertainty both for the prospective gamer and the existing die-hard's. My own group has grown over the years with half its current members being relative newcomers. Each time we brought in a new player there was trepidation but each time our fears have been allayed and we have found ourselves a new friend.

But the anxiety must be quadrupled for the newbie joining an established group. For them they are the outsider, unsure of the rules and the player dynamics into which they must find a niche for themselves. So how can a group of old hands make this introductory period easier for the new player? A lot rests with the GM and his style of running a game. But it is also important that the group follow the GM's lead during these first tentative games. To that end it is important not only to discuss the new recruitment but also to brief everyone on the strategy for easing them into the game. 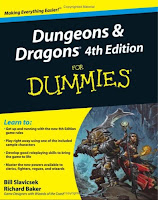 First off don't bombard a new player with the rules. A brief overview of the rules is all that is needed at first, especially if being introduced to a RPG game where rules can be played fast and loose. Once the newbie has had a chance to enjoy their first game then you can start to introduce more complex ideas and rules. Often this will be initiated by the newbie as they begin to see where rules are needed for the situations they encounter. In support of this first tactic its worthwhile pairing the new player with an established one. Be careful though because not every player makes a good mentor.

Make sure the newbie can contribute to the first game. If they spend the session on the sidelines while the old hands do everything they will pretty soon get bored and loose interest. Instead give them something to do that makes them feel important to the progress of the game and they will be hooked from the get go.

Above all go easy on the newbie for the first few sessions. Treat them like the guest they are and be polite, gracious and supportive. No one wants to feel like they are the outsider in an established clique. Friendships forged across the battlefield (metaphorically speaking) can be the strongest you will ever have, so give them a chance to flourish.

That's it really. There's no need to complicate this process. Now go out a recruit some new blood into the hobby.