Today in 1805 Napoleon Bonaparte decisively defeated the Third Coalition forces of the Russo-Austrian army. Often considered a tactical masterpiece this battle is still taught in military schools all round the world.

Napoleon arranged Austerlitz as a masterful trap to destroyed the stronger armies of the allied army of Russia and Austria. The Allied army consisted 85,000 men which Bonapart initially faced with just 66,000 men. He tricked his opponents into thinking he was weaker than he actually was, and then called in reinforcements hidden in the mist shrouded valleys behind the battle lines. He then deliberately abandoned a strong central position on the Pratzen Heights and left his right flank weak. The Allies took the bait and moved forward to occupy the heights and then weakened their centre to crush the French right.

As the Allied forces committed more and more men to the attack Bonaparte launched a counter attack which retook the Pratzen Heights and split the enemy forces. The allied army was effectively torn to shreds and many of the routed troops were killed trying to flee across a frozen lake behind their position. French losses were about 8000 to the Allies 27000.

Napoleon was able to control the battlefield and the actions of his opponents to such an extent that victory was almost assured from the start. He also showed an uncanny ability to 'read the landscape' and used the mist filled valleys to shield his reinforcements from view until he was ready to unleash them. This was Napoleon at the height of his powers and many historians of the period (certainly the ones I have read) consider this not only Napoleons greatest victory but also one of the greatest battles in history. 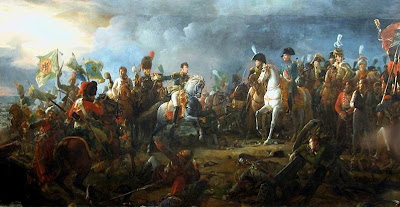 Email ThisBlogThis!Share to TwitterShare to FacebookShare to Pinterest
Labels: Napoleonic, Today in History