Day of the Ninja 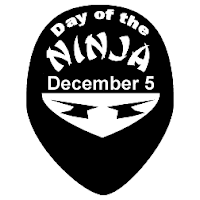 Way back in 1999 the parody website Ninja Burger suggested that Ninjas had taken to delivering burgers within 30 minutes of placing an order. Ninja Burger got wider recognition after it was featured on Fark.com, and it was later turned into a Roleplaying Game. There is also a Card Game of the same name by Steve Jackson Games.

In 2005 the makers of the RPG declaired that December 5th would hensforth be known as the Day of the Ninja. This has been taken up by various sites and different variations on the same theme have evolved such as Creep Like Ninja Day and Die Like a Ninja Day although they all fall on Dec 5th.
Posted by BigLee at 09:01