Sedna - Goddess of the Seas

Some time ago I was searching for northern legends to build into my D&D campaign setting when I came across the story of Sedna, Eskimo goddess of the seas. Sedna is bitter and vengeful, and commands all the animals of the sea and this is her story. 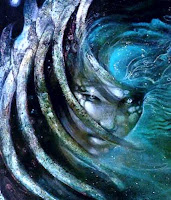 In a time before there were animals in the sea, Sedna lived with her father in an igloo by the shore. Sedna was beautiful, but had not married. One day a hunter came to woo her. He was young and handsome, and asked her to join him at his home in the land of the birds. He gave her many gifts and she finally agreed to marry him. When they were at sea, the man changed into a loon; a spirit in bird form. She sat on the loon's back and they flew to his island. The island was cold and windswept, and there was only fish to eat. Soon she became lonely and afraid.

Her father came to visit her, and she made him agree to take her away in his kayak. The bird spirit chased them; Sedna refused to return with him and he called up a great storm from the sea. Her father was so frightened that he pushed her overboard to save himself. As Sedna hung onto the side of the kayak, her father struck at her hands with his knife to make her let go. The blood from her hands flowed into the water where it formed into the animals of the sea - walrus and seal and whale - as she sank under the water. The animals followed her down into the depths.

A powerful medicine-man can send his spirit to her to comb her hair which she cannot do for herself because of the pain from her hands. If she is pleased, she will send an animal to the hunters.

This a good example of the simple creation myth that many cultures have developed. It is also a beautiful and evocative story and fits well into my Campaign Setting's frozen north.