This is the first of an occasional series of articles on interesting myths or legends that can be used in (primarily) fantasy wargaming or roleplay games. Myths and Legends are the cultural language that bind us together. They provide a common 'language' which most people can understand and relate to. For instance the legend of King Arthur is known throughout the North West Europe but especially in Britain. The themes of Chivalry and Honour are easily understandable to anyone from these cultures and the story of the Round Table has become shorthand for good governance and prosperity.
One legend that caught my attention while I was writing a D&D campaign was the creation myth story of Yggdrasill, the Cosmic Tree. In the beginning their existed a great ash tree called Yggdrasill. Its three roots delved deep into the earth with one reaching the home of the Aesir and the Well of Urdr (the Spring of Fate). This spring was guarded by the three Norns, Urdr, Verdandi & Skuldr (Fate, Being and Necessity). The Norns watered the tree and preserved its life. Yaggdrasill's second root reached Jotunheimr, the Land of the Frost Giants, beneath which was the Spring of Mimir (the Spring of Wisdom). The third root entered Niflheimr, the land of the dead and home to the goddess Hel. Here was the Spring of Hvergelmir (the source of all rivers). 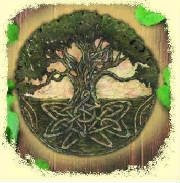 Around the foot of the tree curled the snake Nidhoggr who gnaws at its roots. Nidhoggr is also known in legend as the Dragon who steals corpses or "the corpse tearer". There are few other references to Nidgoggr in Norse myth but its easy to see the similarities with the Serpent in the Tree of Knowledge (of Good and Evil, sometimes also referred to as the Tree of Life) in the Christian Garden of Eden.

All of this is ripe fare for story writing and game design. However the story of Yggdrasill does not end there, it is also inextricably linked to the legend of Odinn. Odinn has many titles one of which is "God of the Hanged". In part this derives from the Icelandic poem Havamal in which it is said that Odinn, wounded from his own spear, hung on the tree Yggdrasill for nine days without food or water. Thus did Odinn learn suffering and took the runes of knowledge and was set free.

I hung on that windy tree for nine nights wounded by my own spear.
I hung to that tree, and no one knows where it is rooted.
None gave me food. None gave me drink. Into the abyss I stared
until I spied the runes. I seized them up, and, howling, fell. 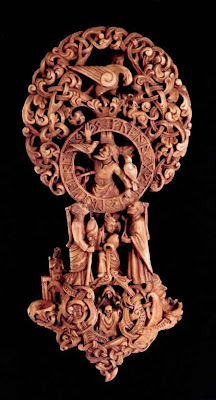 Yggdrasil is also central in the myth of Ragnarok, the end of the world. The only two humans to survive are Lif and Lifthrasir and they are able to escape by sheltering in the branches of Yggdrasil, where they feed on the dew and are protected by the tree.

The bellowing fire will not scorch them; it will not even touch them, and their
food will be the morning dew. Through the branches they will see a new sun burn
as the world ends and starts again.

The world is then drowned in a great flood that cleanses the world and when the waters recede the world is reborn, fertile and vibrant.
I made use of this collection of myths about the world tree in my recent D&D campaign. I decided that I would use the myths as 'inspiration' for a location based encounter that would fit my existing campaign world and the story I was evolving. I wanted an information encounter where the players would have the chance to interact with an NPC and learn information that would develop and drive the story forward. I therefore opted for a Location, a great tree called Yggdrasil and its inhabitant, an aged halfling called Finagle.
Calling the tree Yggdrasil was a direct reference to the Norse Myth and the tree's status as the tree of Knowledge. I also liked the fact that Yggdrasil is linked to Ragnorak and this was a portent of what was to come in the story (hell would literally be opened). The old halfling that lives in the tree has lots of useful information if the right questions are asked. However his name, Finagle, is a major clue that he is not to be trusted (Finagle means "To obtain or achieve by indirect, usually deceitful methods") and represents the snake Nighoggr, living in and gnawing at the roots of the tree. On face value Finagle seems like a trustworthy character but in truth his primary aim is to deceive and mislead the players. To give my players their due they were suspicious and never fully trusted this character, but in the end they were deceived and my evil plan (Bwahaha!) unfolded just how I wanted it. 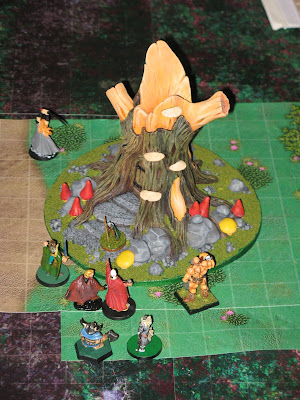 I also used the myth of Yggdrasill as inspiration when painting a model to represent the tree itself. I bought a large resin tree at a wargames show a few years ago and here was my chance to use it in a game. The model was excellently detailed and quite easy to paint and I think it made an excellent centre piece during this encounter.

Obviously I didn't have to do all this research or paint the models in order to pull of this particular encounter...but where's the fun in that? There are hundreds of myths and stories in the Norse and Celtic cultures that could be used as inspiration when writing games. I will continue to read and develop these myths and try to find ways to incorporate them in my games.