Late last year I finally decided to invest in a set of Winsor & Newton Series 7 brushes for my miniatures painting. Series 7's are often described as the pinnacle of quality and I was eager to try them out. I bought two brushes (00 & 000) for detail work but I decided to hold off writing a review until I had used them for a good length of time.
Series 7's were first made in 1866 to the specifications of Queen Victoria . The first brushes came with Ivory handles but nowadays they consist of a black lacquered handle, a nickle plated ferrule and the best Kolinsky Sable hair. There are two ranges of Series 7's; the standard range consists of 13 sizes from 000 to size 11; W&N also produce a miniatures range with shorter hair for a finer point and these go from size 000 to 6. It is this latter range that is best suited to the needs of the miniature model painter. 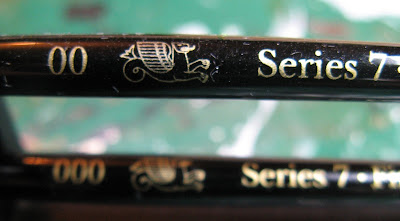 Series 7 brushes are manufactured using the winter tail hair of the Kolinsky Sable. This hair has excellent 'carrying' capacity due to the minute scales that cover the hairs. This means that you don't have to keep reloading your brush when working on small or intricate details. The hair also has exceptional spring and retains its shape even after long use. My brushes have seen regular service over the last six months and still look and perform as well as they did when I first bought them. Indeed this was one of my primary reasons for investing in Series 7's as I was fed up of cheaper sable brushes becoming useless after only a few months.

Its worth mentioning at this point that there are different types of Sable available and that quality varies enormously from one type to another. Kolinsky Sable refers specifically to the winter tail hair of the male red sable. This is the best quality hair for brushes and is used in Series 7 Brushes; Red Sable is usually second grade Kolinsky sable or weasel hair; Black Sable is actually hair from the polecat. It has similar properties to red sable but is often limited to use with oil colours because it is more coarse than red sable; Brown Sable is hair from other parts of the animal other than the tail and is often dyed to give it a uniform colour. This hair is often used in lower quality bushes; Some brushes are just labeled Sable and these may contain any of the above hair types. Squirrel hair is also sometimes labeled this way; Finally we have Sabeline which is an imitation made from ox hair and dyed to look like real Sable.

With all my brushes I use Masters Brush Cleaner to help clean and preserve the hairs. However there are a few simple rules you should observe, whatever brushes you use, to extend their life.

I have been so impressed with my new brushes that I decided to make a stand to hold them. The end result looks a little like a Samurai Sword stand. I have even been known to talk to my brushes muttering words like "precious" and "my pretty".