The dice favored us

The Dagenham Dungeon Delvers faced a new enemy last night. But the dice were kind and we were (for a change) undefeated. For months now our irregular 4e D&D games have seen us slogging through a complex of underground rooms, fighting for every inch against a seemingly endless supply of Kobolds. But not last night. 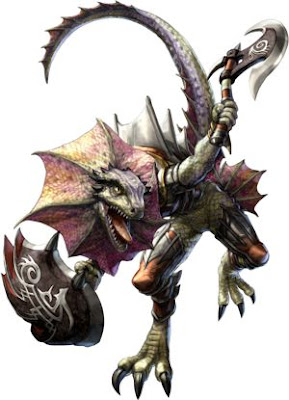 This time it was Lizardmen that blocked our path. Our mission (to recover an ancient artifact from the ruins of this underground Palace) looked like it would be halted only yards from our ultimate destination. An entire Lizardman garrison stood in our way.


We should have negotiated. We didn't.


The GM looked slightly panicked but let events play themselves out... And then we started kicking butt. The adventurer companions (two Dragonborn brothers, two Halfling brothers and a lone Eladrin Swordmage) worked together in a masterful display of martial prowess. The Dragonborn brothers blocked the doorway and held back the overwhelming Lizardman garrison while the Eladrin used his Lightning Lure ability to pull individuals behind the lines where the Halflings dispatched them. Unable to use their superior numbers against us the Lizardmen found themselves bottled up and picked off one by one. 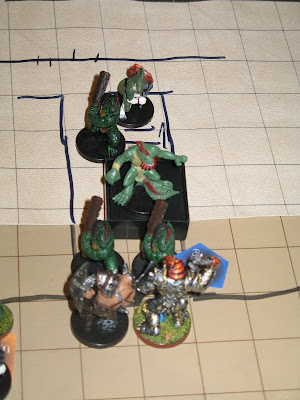 Slowly it dawned on our GM that we might actually win this encounter (a level 10 encounter and we are a level three party!) and his normal demonic grin slipped from his face. This is an unusual experience for us players, it was like entering the twilight zone. 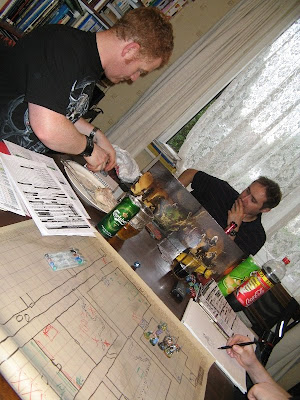 Eventually the few surviving Lizardmen manged to retreat and both sides took this time to regroup and get their breath (and encounter powers back). Unfortunately the advantage had now been lost (our strategy relied on the Lizardmen pressing their attack on ground of our choosing). Having slaughtered half their number we were now forced to negotiate with the survivors for access to the battlements where we thought the artifact was hidden. This was almost as much fun as the earlier combat with verbal sparing and positioning leading to our eventual access to the battlements. With the Artifact in our hands all we have to do now is make our escape before the Orc raiding party arrive.
Once again a great game that was enjoyed by everyone.
Posted by BigLee at 09:01