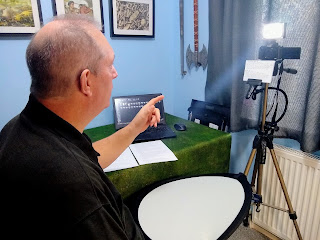 A few days ago I recorded my 40th episode of the quarantined wargamer and this minor milestone got me thinking about this whole YouTube thing I have been working on. So I thought it would be a good idea to share a few behind the scenes pictures and have a look at where I am with this project, where I think it's going and ask the all-important question, can I keep it up?! Before I start it's worth saying that for various reasons the next few months are going to be very busy for me. Both professionally and on the hobby front, I have a lot going on and I can see things getting busier, so I need to be very careful not to overload myself. So this bit of self-reflection is probably a good idea (for me at the very least) and a chance to ask for some feedback from regular readers and viewers.

I kicked off The Quarantined Wargamer, as its name suggests, because of the first lockdown in the UK, just as everyone was going into what we all thought of as enforced quarantine. My initial idea was that it would just be me rambling on about what I was doing, showing off some of my models and maybe some of the solo games I was playing. As time has progressed my idea about what the channel should actually be about has evolved a little bit. However, I have stuck to some basic principles. 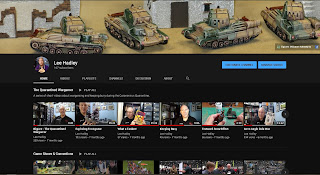 As with my blog, I'm definitely going down the route of no advertisements and I have no plans to monetize my stupid ramblings. For a start, I can't imagine anyone wanting to pay good money to listen to me and besides I don't want viewers to have to wade through adverts just to hear me waffle on. Another core principle I have tried to stick to is that I wanted my videos to be short. There is a plethora of excellent youtube channels and podcasts out there at the longer end of the scale. Most seem to come in at between an hour and 2 hours long. I sometimes find it hard to listen to these programs, not because I'm not interested, but because I just can't find that amount of time to sit and do a whole program. So from the very beginning, I wanted my videos to be under 15 minutes per episode. The principal was to produce bite-size chunks rather than a full gourmet meal! I think I've only gone over the 15-Minute limit a few times and most of my videos average about 10 or 12 minutes long. Judging from the response they seem to go down well and hopefully, they're short enough to be very easily digestible. I may well decide to do some longer stuff at a later date but probably not under the TQW title.

When I started this malarkey I just shot some video on my phone but there were some issues with the sound quality and the picture quality that I couldn't live with.  It didn't take me long to switch over to use my Canon G5X camera which meant I could film in full HD quality and with better sound recording. Another development was the move to a very simple video editing program that gave me the basic tools I needed to do some fancy things with film. Unlike my first videos, I'm now doing transitions cuts, splices, overlays and even the occasional special effect. I can insert pictures and links to other sites and videos which I couldn't do at the very beginning. Also, I'd like to think that my presentation skills have improved a bit as I have got more comfortable in front of the camera (I can probably be described as an introverted extrovert and borderline narcissist, so I'm getting more comfortable with every video)! 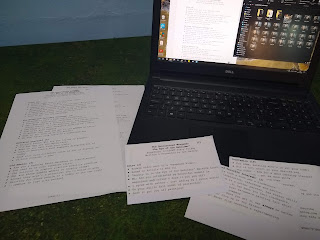 One surprise that I never expected when I started was that I now spend more time writing and preparing scripts than I do actually filming. Typically I will start by preparing an outline which is just a few sentences to flesh out a framework for the video. In my first videos, I was 'winging it' in front of the camera, but pretty soon I realised I needed some sort of a script. I tried writing the scripts word for word but that was a massive task and as it was, the way I write is not the way I speak and it just didn't sound right. I've now settled into a routine of building that initial framework into a list of bullet points for each section of the video. I use these to keep me on track but much of what I am saying comes across much more naturally in front of the camera. As I said it's getting easier with each video and hopefully my presentation skills are improving (you are the judge of that). I'm now trying to work on improving the editing of the videos and I treat each one as a chance to do better than the last one. 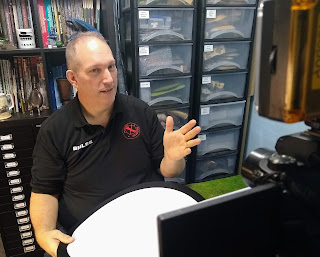 The filming itself is a relatively simple process, to be honest. I tend to do my filming early on a Saturday morning or sometimes in the evening, mainly because my neighbours are a very noisy bunch! The problem with living in an urban environment is you never have peace and quiet. The microphone picks up every sound, so I have to be very conscious of noises like the sound of lawnmowers, drills, saws, hammering, barking dogs and screaming kids because they sound really loud when you playback the video. It's not just outside sounds that can be a problem because the plumbing in this old house of ours makes all the radiators 'Hiss' when the toilet is flushed or someone runs a sink. I've never noticed it before but when it happens in the middle of filming it is very evident in the playback!

With the setup ready, a semi-quiet moment found and my script prepared, I can usually film the whole video as a single take. It hasn't always been as smooth as that, but practice and experience are slowing making my finished product better (I hope!). Of course, more complex videos such as tutorials need more planning and assembly, but the 'talking head' type videos I mostly do are a very simple setup that most people could replicate. It's worth stating that other than a subscription for the video editing software, and a small layout for a bracket to mount my script cards on, all the other equipment is stuff I already owned. 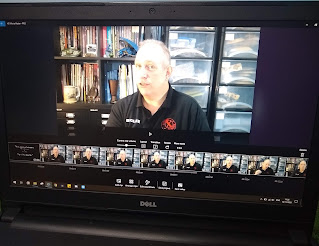 The next step is the editing process and this takes quite a long time. This is where I cut out any pauses, stuttered sentences, strange sounds or just plain muffed lines with subsequent retakes. The editing stage can easily take anything from an hour to 3 hours for a 15-minute video depending on the complexity of the content. If I'm inserting lots of pictures, for instance, I also have lots of edits to make, so it obviously takes longer than a simple talking head type video. Once the basic edit has been done (including titles, credits and music) I can convert the whole thing into an MP4 file and upload to YouTube Studio. Then it's just a matter of changing some of the publishing settings and picking a date to scheduled release.

One of the most surprising and hardest parts of the whole process has been trying to find a photograph to use as a title page for each video. YouTube allows you to pick a thumbnail from some of the images that have been shot, but this is nearly always a picture of me pulling a gawpy face! I now hunt down a suitable cover picture from my photo albums to use. Sometimes I take a picture specifically for the title page, but a lot of the time I can find something from my personal collection of over 100,000 photos taken at games, wargame shows and living history events.

I have now made 40 of these videos and dipped a tentative metaphorical toe in the world of YouTube. I may eventually have to scale back the weekly publishing schedule, if and when the world gets back to normal and we start doing things at the weekend like we used to do. In fact, I was chatting with my wife today about how, in normal times, we always have something to do on a Saturday or Sunday and the hardest part of the last eight months has been adapting to staying at home. We have been keeping ourselves busy (in my case making these videos) but its a poor substitute for weekends away, visiting museums, attending living history events, exploring wargames shows or just haveing games with my friends or shopping with the family. Eventually, these things will resume and I'll have to reevaluate how I make my videos, but for the time being, I have no plans to stop.