The logistics of warfare is an area that we often overlook when we wargame. Supply lines and lines of communication have always been vital in warfare but as armies became more and more mechanised the needs of fuel and spare parts and other essential items became as important as things like food and medicines. One of the major problems for the allies with invading in the Normandy region was the lack of a significant port. The raid on Dieppe had shown that trying to capture a port in the first wave of an invasion would be extremely costly, if not impossible. They fully expected that Cherbourg would probably be out of action for some time after the Invasion, but more importantly, it was a long way from where the front was going to be in maybe a month or two months time. This knowledge influenced allied backing of the Mulberry harbour construction, providing a port facility much closer to where the fighting was going to be, not just during the Invasion itself, but in the immediate months ahead.

The harbour served its purpose and by the end of 11th June 104,428 tonnes of supplies had been landed in Northern France. Rough weather hampered the effort and forced the abandonment of Mulberry Harbour A at Omaha Beach. However, Harbour B at Gold Beach was still in use 10 months after the invasion, by which time over 4 million tons of supplies had been landed. The scale of the logistical effort to sustain the invasion was huge. The U.S. military alone had to ship 7 million tons of supplies and replacement vehicles to the staging areas, including 450,000 tons of ammunition. All of this took place in an age before containerisation and required an army of dockhands, drivers and support personnel to keep the flow of material to the fighting troops at the front. 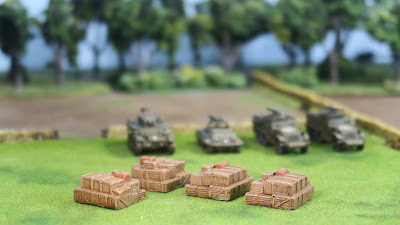 These little models are not particularly good. They are made from a plaster-like resin which soaks up the paint and has lots of bubbles in them. However, I bought these for the silly sum of 50p on a bring and buy stall some years ago, so despite their quality, there were still worth buying. To be honest, when you look at them at arm's-length on the tabletop, the flaws are hardly noticeable, so they will do for most games. I think they are actually meant to be for 28mm wargames because the crates are pretty large for 15mm. However, I think that they'll be ideal for a tank depot where the crates carrying spare gun barrels, engines or sections of track would be pretty large.

I have a few more 'scatter terrain' items to finish off which should be ready to show off for Friday. Don't get too excited, they are tiny, won't really have much impact on a game but will enhance the look of certain scenes on the games table.