The Chausey Granite Walls of Normandy 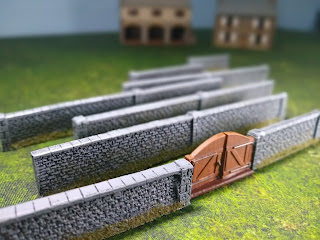 Nothing fancy this Friday, just more walls. I painted up a load of low walls for things like field boundaries a few weeks ago and now its time for some tall walls for courtyards. This small set is from Timecast and I actually bought them to accompany some Landmark buildings that I bought at Salute in 2019. The buildings are very nice but not suitable for my Chain of Command games because they don't have internal spaces for infantry. They're more than ok for What a Tanker games though and these walls could be used in either setting.

These stand about 18mm tall so will provide complete cover for infantry and concealment for some smaller vehicles. I only have enough for a small courtyard between a few buildings but it least I have that option available to me now. The set includes four long sections 146mm long (just under 6"), two smaller sections 75mm (3") long and two more 55mm (a tad over 2") sections. The set also comes with a large double gate which I mounted on a section of sprue so it would stand up. With the gate, the whole lot comes in a fraction under 3ft. I normally try to write a little historical blurb about what I have painted but honestly what can I say about walls.. well more than one might imagine! 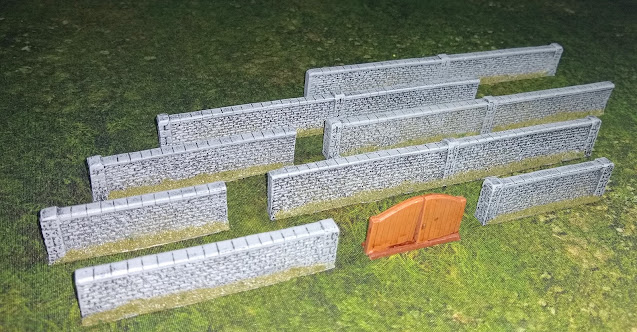 In Lower Normandy and the area around the Cotentin Peninsula, it is quite common to see buildings built from light granite blocks. When I was much younger I spent a couple of family holidays in the Channel Islands and the use of granite as a building material is common there as well. Most of the Granite apparently came from the island of Chausey - geographically part of the Channel Islands but under French jurisdiction - which is why so much of the archipelago's buildings share the same building material to those of the Cotentin Peninsula. The further east you go in Normandy the more likely you are to encounter buildings (such as the larger ecclesiastical buildings like the Cathedrals) made from a particularly hard limestone known as Caen Stone. Unlike the light grey Granite of Chausey, Caen Stone is a light creamy-yellow so its possible to tell which bit of Normandy you are in from the colour of the buildings.