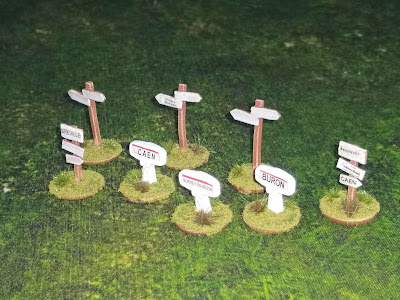 Today I have another small addition for my 15mm Normandy 1944 terrain. These signposts are from Peter Pig and feature some signpost decals that Model Dads released back in 2014 I think. I'm not sure the decals are sold any more which is a great shame because they are pretty good...and I've finally got some signs to put them on! I have kept a few of the signs blank so I can fill them out at a later date when I have a specific game to use them in.

The Peter Pig set consists of eight metal signposts, some typical roadside signs and some more ad-hoc affairs presumably put up by the military. You may notice that some of the signs feature the names of locations in the British and Canadian sectors around Caen. "But you have American infantry" I hear you say, which is true at the moment...

I have just bought a load of British Airbourne troops for battles in the eastern end of the Overlord lodgement, which I'll be painting in the Analogue Painting Challenge over the winter. A mix of very nice figures from Peter Pig and Skytrex are sitting on my desk as I type this. I'll be cleaning them up and preparing them for the challenge over the next few weeks... but more on that in a later post, closer to the time.