The "wettest drought in history" continues unabated here in the UK and because last Monday was a UK Public Holiday it 'Droughted' Cats and Dogs for most of the day. Consequently my family and I decided to change our initial plans for a day out. The abandoned 'Plan A' involved standing outside in a wet and muddy field watching a WWII Reenactment and Spitfire Flyover. If it had been just me I would have suffered the weather but as this was supposed to be a family day out I decided to go for a weatherproof option, ie a Museum. 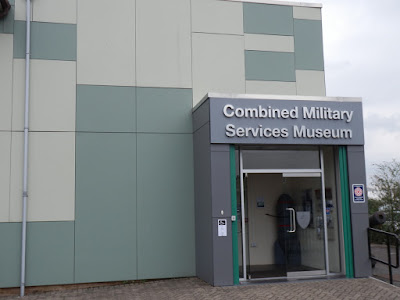 So we went to Maldon in Essex with the Combined Military Services Museum firmly in our sights for the day. I have never been to this museum before so didn't know what to expect. Unfortunately photography inside isn't permitted (I have rechecked the website and there is no mention of this) which is a pity because I could easily have shot hundreds if not thousands of pictures in this amazing collection.

The collection is all owned by one man and represents a lifetime of collecting and preserving military memorabilia. The museum opened about seven years ago and displays an incredibly diverse and comprehensive selection of largely British weapons, uniforms and equipment. The uniforms displays are particularly impressive with original kit in an incredibly good state of preservation on view. Another highlight includes rare WWII Royal Marines combat kit, as well as the only surviving 'Cockleshell Heroes' canoe, and other original equipment from Operation Frankton.

Also in the building is the Donnington Historic Weapons Collection. This is a unique collection of weapons used and captured by the British Army, during the 19th and 20th centuries assembled by MOD Donnington in Shropshire. It is one of the best collections of weapons outside the Royal armouries in the UK and includes some amazing survivors. One of my favourites is the actual Tommy Gun held by Winston Churchill in the now famous 'Gangster' picture. The Photo, taken in July 1940 was used in both British and German propaganda throughout the war. The British using it to show Churchill as a Strong War Leader while the Germans portrayed him as the gangster of Europe and a threat to peace.

This truly is an outstanding collection and is accurately described by its Patron Lord Paddy Ashdown as "...a local museum [which] deserves national recognition."

Although I couldn't take pictures inside I was able to get some shots outside. The Museum has two tanks on display and an APC. All are exposed to the elements and looks a little weather-beaten but are none the less interesting exhibits. If you get a chance to visit I'm sure you won't be disappointed.