Tigers in the Mud 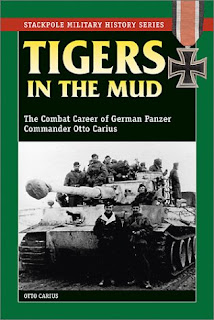 Tigers in the Mud is by now a relatively famous books about the military career of Otto Carius written by the man himself some 15 years after the war. Unlike many biographies this is a book in his own words and based on lots of documents, correspondence and photographs collected (and saved) by the author throughout his war years. Some parts of the book are fascinating insights and there are lots of little facts that jump out at the reader, but the translation of the original German text is a little clumsy and makes this a hard book to read.

The action in the book is almost exclusively set on the Eastern Front facing the Russians (referred to as 'Ivan' throughout), although in the latter chapters he is posted to the west facing the Americans. Much of the action is described in a very matter of fact way which is both refreshingly clear but also on occasion frustratingly lacking in detail. Some scenes for instance are described almost like an After Action Report so while this is a very informative book the reader doesn't get the full experience of the sights, sounds, smells like one does in other biographies. Having said that one of the best chapters 'Portrait of the Tiger' does reveal the physical discomforts and difficulties of fighting in the Panzer VI. 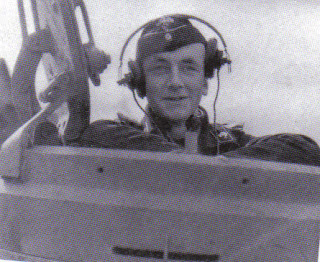 One of the big faults with the book in my opinion is the translation which I often found a little hard to read. Some paragraphs read like a bunch of unrelated sentences dragged together and there was little narrative flow to most of the chapter's. Some of the translations also used English phrases and colloquialisms which just didn't sound right coming from a German officer and made reading some sections disconcertingly unbalanced. Having said that the very fact that this relatively obscure memoir has been translated at all has meant it has reached a much wider audience that it otherwise would have.

Throughout the book Carius makes it clear that he feels the ordinary German soldier has been treated badly in the post war period. To some extent he is right, in that it has long been popular to portray every German soldier as a warmongering Jew hating Nazi. The truth is that many regular German soldiers were not fighting for Hitler or for National Socialism but because their country asked then to fight and they saw it as their duty to respond to that call. In that respect they were no different from the soldiers of other nations who fight for their country not the politics that have resulted in the war. Several times Carius states that at the front an individual soldiers politics or religion were irrelevant and all that really mattered was comradeship and fellowship which is probably a sentiment that most veterans can understand.

Having said that Carius never acknowledges the wrongs perpetrated by his Nazi leaders, even in retrospect, and I found that hard to ignore. At the front, insulated from reality and fighting against an implacable enemy, he could be excused for being blind to the evil of Germany's leaders. However, looking back and writing 15 years later he showed remarkably little comprehension of the chaos that was unleashed by his country or that Germany as whole had to accept some responsibility for allowing such a regime to gain power in the first place. I didn't expect Carius to apologise for his country but most other German biographies (such as that by Von Luck) I have read have at least acknowledged with hindsight that they were fighting for an unjust cause.

I'm not sure that Carius was sympathetic to the regime as he candidly acknowledges Graf von Stauffenberg who attempted to assassinate Hitler as a hero because he was willing to die for his belief that Germany needed to be saved from destruction by its own leaders. However he is also scathing of the other plotters because they did not act sooner to eliminate Hitler. Carius also describes potential saboteurs and informants as traitors without seeming to realise that these people also risked their lives (and those of their families) by their actions. Overall the reader gets a very mixed message on the political alignment of the author. Maybe this is deliberate as he was initially writing for an audience of his military peers and politics was deemed irrelevant to the front-line soldier whose main priorities usually focused on survival. 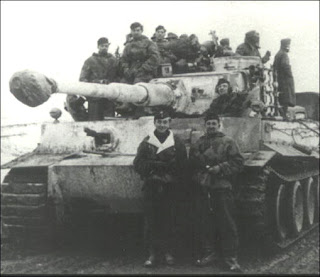 Politics aside there is a lot about this book that I did enjoy. There are plenty of tactical insights into how the Tigers of the 502nd Tank Battalion were employed and the difficulties they faced in Russia. The state of the roads and unsuitability of cross country travel in the Tiger is mentioned time and again. There are also numerous references to march routes needing to be scouted out - usually by the commander - to assess the condition of roads and in particular bridges. Although it is clear the Tiger was not the unmaneuverable beast it is sometimes portrayed as, its capabilities were severely restricted in the boggy and marshy terrain in which they were deployed - hence the name of the book.

Carius takes great pains to acknowledge the work of maintenance crews in keeping his Tigers running and combat ready. Problems with running gear, broken tracks and final drives are mentioned regularly. Although the Armour of the Tiger made it a formidable opponent its was far from invulnerable. On one occasion the commanders cupola of Carius' tank was shot clean off by a lucky shot from a Russian Assault Gun - only the fact that he was ducked down getting his cigarette lit by another crew member saved his life! The tiger was also vulnerable to HE and Mortar rounds which could send shrapnel through the engine deck into key components such as the radiators. Handling of the tank was also key to the vehicles endurance. On several occasions Carius describes hasty or green drivers throwing tracks by reversing or turning too quickly. 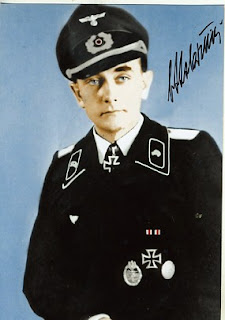 After the biography there are several original documents that have been reproduced along with English translations of them. One of the most interesting of these is a report by the field engineers responsible for maintaining the Tigers at the front. Their report is a long list of common faults, analysis of why these have occurred and recommendations for eliminating the problem in future. I got the impression that many of the faults listed should have been identified during proper trails of the tank before production was begun and before the Tiger was issued to front line troops.

So is this a good book? Yes and no. The translation could have been better and Carius' matter of fact narrative style was hard to read at times. But it is still an incredible story of the epic struggle between the Germans and Russians. Carius himself was undoubtedly a brave soldier earning the Iron Cross 2nd and 1st Class, the Knights Cross and Oak-leaves to the Knights Cross. He was also wounded several times eventually being awarded the Wound Badge in Gold and the Panzer Battle Badge in Silver for 100 Assaults. His loyalty to his comrades comes through clearly in his words and while I have some misgivings about his stance on the war one has to remember this book was originally written for fellow veterans of the 502nd Panzer Battalion not for a wider audience.
Posted by BigLee at 05:04