Yesterday I posted pictures from the first half of Tiger Day. After our first look at the Tiger, lectures from the likes of David Willey and a slap up lunch we went out to watch the days tank display in the arena. As Premium Ticket holders we had our own roped off viewing area at the top of the slope outside the balcony area where we had lunch. The view from here was good (elevated and nobody in the way) but at nearly 100m from the tanks it just felt too far from the action... so I ducked under the rope, joined the great unwashed masses and got right down the front for a much better and closer view of the display.

Things got off to a shaky start as the first tank out, the Matilda (Infantry Tank Mark I A11), was having engine problems. Steam was poring out of the engine compartment and the two crewmen were clearly having difficulty coaxing their 76 year old tank back to life. This vehicle was manufactured in 1938 by Vickers Armstrongs Ltd. but ended its service as a target on the the Otterburn Ranges! It was subsequently recovered and restored to running order although the engine and gearbox are not original. 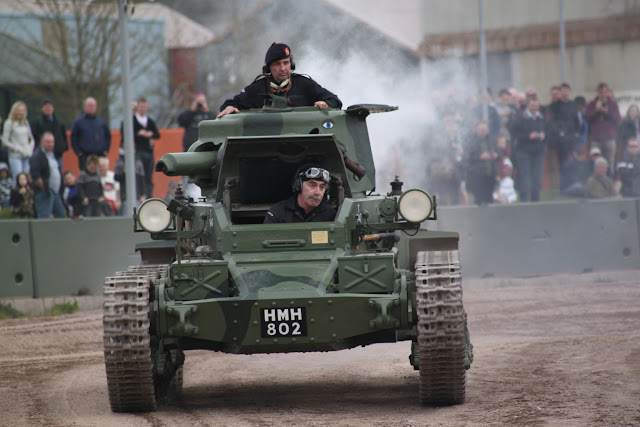 Next in the arena was the Matilda II (Infantry Tank Mark II A12). At the end of 1936 the War Office recognised the need for a better armed and better protected tank than the Matilda. The result was the Matilda II which went on to develop a reputation as a superb tank in the early part of the war. It carried the 2pdr gun which was considered one of the best anti-tank guns in the world at the time. However as a tank designed for infantry support the gun suffered from its inability to fire HE rounds. Due to its small size the gun could not be upgraded and once the Afrika Korps started using the 88mm gun in an anti tank role the usefulness of the Matilda II was soon reduced. This particular tank was manufactured in 1939 by the North British Locomotive Company. 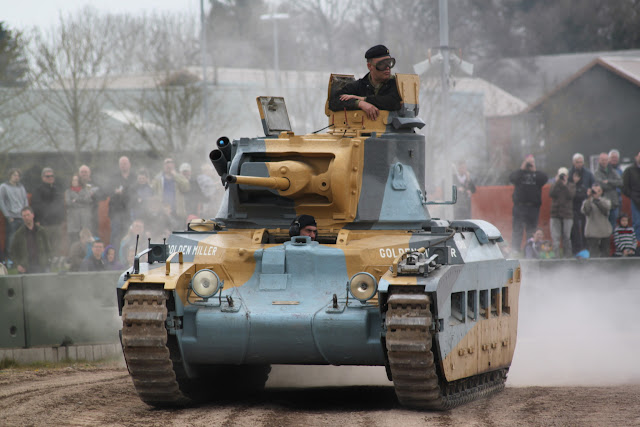 The Panzer III (Sd Kfz 141/1 Panzerkampfwagen III Ausf L) was originally conceived in 1934 as the principle combat tank of the Panzer divisions. It was armed with a 50mm Gun (KwK39 L/60) that fired armour piercing projectiles. This particular vehicle was manufactured in June of 1942 by MAN in Nuremburg and was sent to Bengazi in July 1942. It was issued to the 8th Panzer Regiment and probably fought at Alam Halfa before its capture by the British. 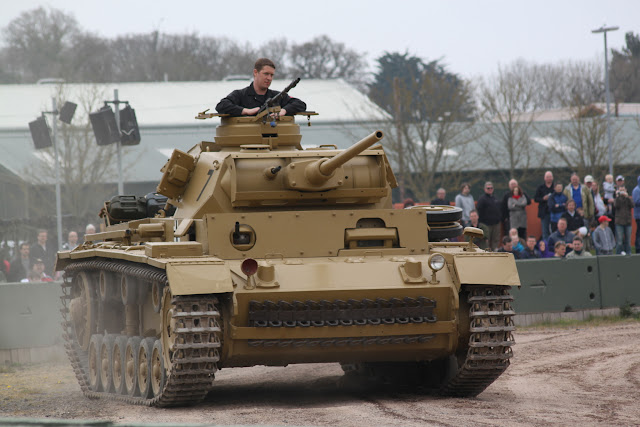 The T34/85 was one of Russia's best tanks during the Second World War. Produced in vast numbers it was easy to build and easy to use. Its diesel engine was ideal for the cold Russian winters and in fact was so good the same engine was being used right up to the mid 60's. The original turret design accommodated two drew and a 76mm gun making it a formidable opponent. However later models were upgraded to a three man turret with an 85mm gun making this a truly war winning weapon. Later in the day I had a chance to ask David Fletcher the museums Librarian (and author of countless books on tanks and tank warfare) which tank he thought was the best of the war. He answered that it was unquestionably the T34/85. 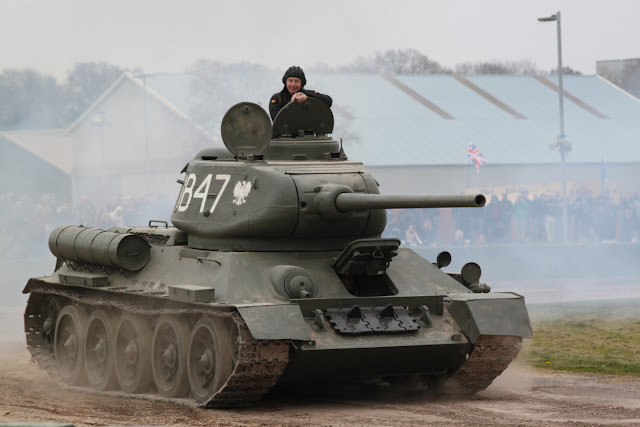 This M4 Sherman (76mm) regularly trots round the arena at Bovington and is as agile as it was when first built which is a testament to the reliability and robustness of the M4's design. Like the T34 it was produced in vast numbers and when it first saw action was undoubtedly one of the best tanks on the battlefield. By the end of the war it was being outclassed by other tanks but the Sherman proved its worth because it was so adaptable. Variants of the Sherman abound including a range of AVRE's, the swimming DD's and the British Firefly. 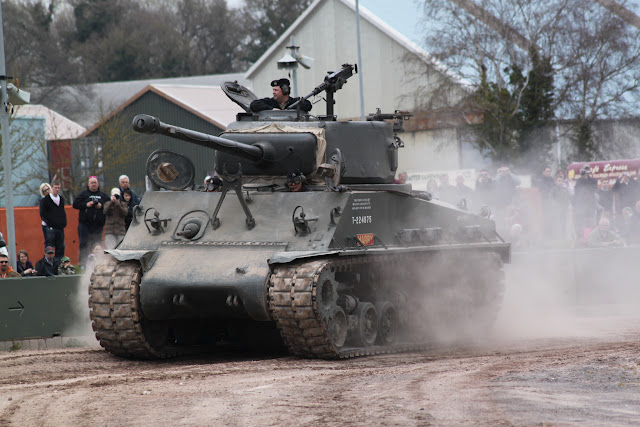 The A34 Comet was one of the best British tanks of the Second World War, unfortunately it entered service far too late to have a significant impact on the outcome of the conflict. This is the Model IB and was manufactured by Leyland Motors although I can't find a record of when it was built it was probably late 1944. The Comet entered service in the spring of 1945 and continued in use until 1960. 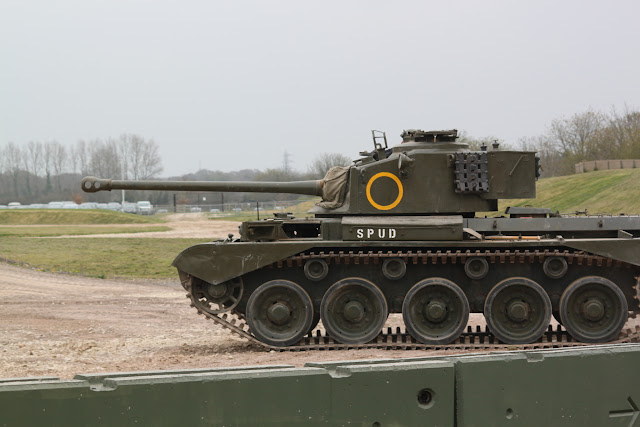 The first German tank build after the war was the Leopard Main Battle Tank. Gone was the obsession with armour and the gun, instead this design focused on speed as its key attribute. This tank is actually a Canadian combination of the 1A5 turret attached to a Leopard 1A3 chassis and was manufactured sometime in the 1970's by Krauss-Maffei Wegmann. 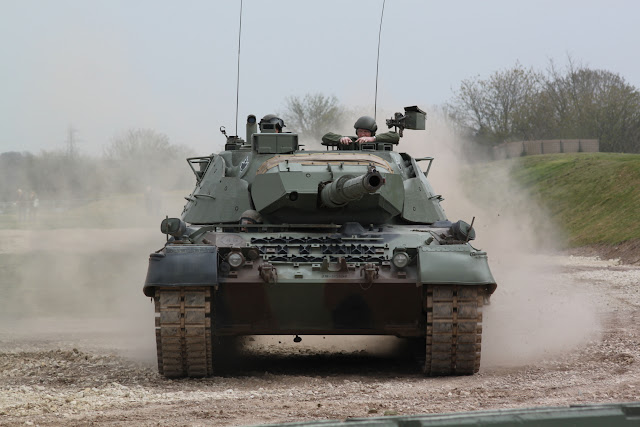 Having been teased with all these other great vehicles it was finally time for Tiger 131 to come out and wow the crowds. Even compared to modern tanks like the Leopard the Tiger looks menacing. Its squat boxy design may have been out of date by the time the tank saw service but there is no denying the psychological impact this beast had on those that faced it. 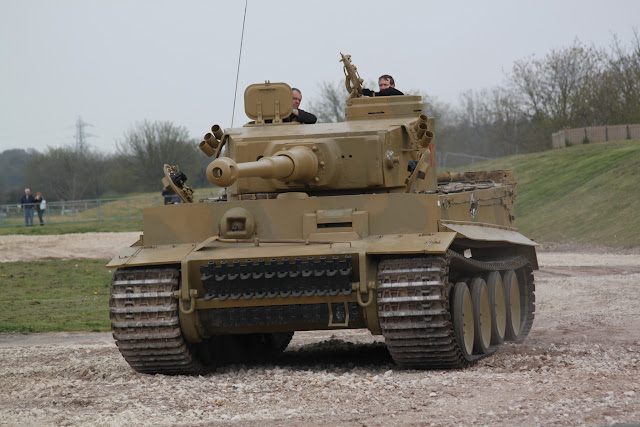 Tiger 131 was manufactured in February 1943 by Henschel and Sohn , Kassel. It was sent to Tunisia at some time between March 22nd and April 16th 1943 where it was issued to the 3rd Platoon, 1st Kompanie, Schwere Panzer Abteilung 504 of the German Army. It was captured by 48 RTR at Djebel Djaffa, Tunisia, on 21st April 1943 and was quickly shipped back to England for assessment. It was restored to running order in 1992 but the latest round of restoration has seen the tank brought back to a much more original condition (see yesterdays post for more details). 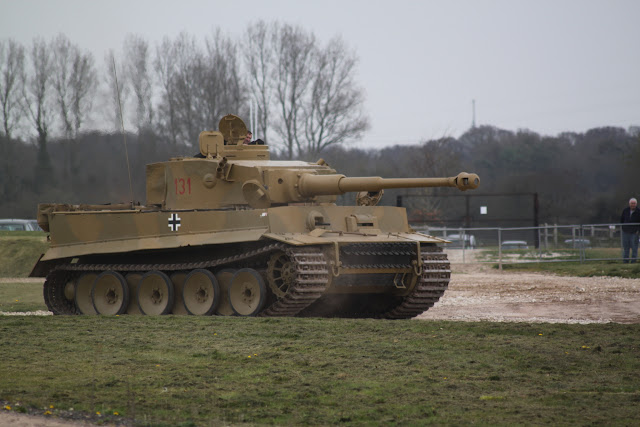 A total of 1,354 Tiger I tanks were built between July 1942 and May 1944 and the Museum’s example is the only one of the six surviving Tiger I tanks that is capable of running. As such it was an incredible privilege to see this vehicle in action and even more so to be able to get up close and personal with it.

Tomorrow I'll post a slideshow of all my photo's from this event including many that I haven't posted here yet. It could be argued that I got a little trigger happy with my two camera's but I take the view that you can never have enough photo's of tanks!
Posted by BigLee at 13:55