The Delvers do it Differently

The Dagenham Delvers met last night for a different sort of roleplaying game. The Evil GM pleaded overwork and lack of preparation so we didn't play our regular DandD 4E campaign game. Instead another member of the group, Dave, stepped up and introduced us to another game system suited to short one or two session games. So on Friday night we donned Lycra (metaphorically) and became Superhero's for an evening.

The Marvel Heroic Roleplaying game has a fairly simple but nuanced game system (known as Cortex Plus) at its heart. Roleplaying and combat are based on a simple set of attributes unique to the character of choice. Characters are pre-generated but can come from any part of the Marvel universe. Some basic knowledge of these comic book characters is useful but not essential as descriptions and histories are provided with each Superhero sheet.

Our stand-in GM is something of a Comic Book Geek so there was no shortage of background information when we needed it. This was useful as most of the rest of the group have a very patchy knowledge of the Marvel Universe and some members of the Delvers haven't even seen the Hollywood movies based on the characters. Despite this lack of background knowledge the game still worked well as pretty much all the information you need is on the character sheets. 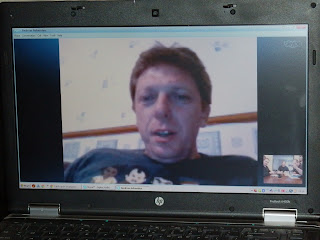 I played Iron Man, the Evil GM took on the role of Spider-man and Derek became Wolverine for the evening. Even Andy - living in Lincoln 140 miles away - dialled in using Skype and played Captain America. The game was a relatively simple two act 'beat up the bad guys' scenario. Combat mechanics favour cooperative play, imaginative problem solving and story driven roleplaying. The result was a surprisingly fun and creative session without a miniature in sight.

Its been a while since we played an exclusively roleplaying game without miniatures and it was an enjoyable experience. Combat for instance involved building a dice pool utilising the various attributes on the character sheet. Because combat isn't restricted by simple "I hit with my sword" or "I shoot my pistol" the player is encouraged to be creative and much more theatrical in his/her actions. 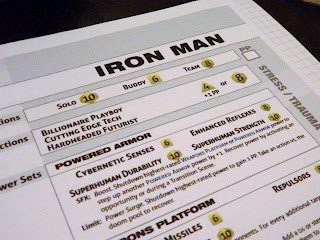 For instance Iron Man makes a Solo Attack (Add d10 to the dice pool), and utilises his Cutting Edge Tech, ie his suit (add d8) and Superhuman Strength (add d10) to flip a chunk of broken concrete in the air before hitting it with his Repulsors (add d8) to create a concrete shrapnel blast (area attack add d6 for each additional target) to hit the Bad Guy and his minions. They then use their attributes to build a defence and we compare results to see who wins and how much damage is done. Its a little more complex than this description but its still a simple system that allows for an infinite variety of actions.

We played out the two 'acts' of this scenario which has set up a follow up game for another session. Hopefully next time we can get a little more done as we have a better understanding of the rule mechanics and have fewer technical difficulties (our Skype connection to Lincoln kept crashing). Overall it was fun and challenging which is all you need in an RPG. For more info about the game check out this great review on RPG.Net.

Apparently there is also a fan produced Fantasy RPG conversion utilising the same mechanics and we might give this a try in future.
Posted by BigLee at 07:30