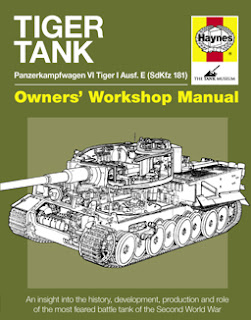 I've just finished reading the Haynes Tiger Tank Owners Workshop Manual. I wanted to buy this earlier but I actually got it as part of my 'Goodie Bag' at the end of Tiger Day. Now that I've finished it I have to say it was a darn good read.

Unlike a traditional Haynes manuals these books are not exclusively given over to technical drawings and instructions on how to change the smallest washer. This is much more of a history book than its cover suggests but with lots (and I mean lots) of detailed drawings and photos which show this particular vehicle in greater detail in a published work than I have ever seen before.

Much of the information presented in this book was gathered during the two periods of restoration this tank has undergone but a significant portion was also derived from the technical reports prepared by the Tank Evaluation Centre at Chobham shortly after its capture. There are also more pictures of Tiger 131 on the battlefield where it was found abandoned that I have seen published anywhere else.

All the main systems of the Tiger are discussed and evaluated in this volume from the troublesome engine to the much feared 88mm gun. But some myths are also dispelled such as the idea that the tank wasn't as agile as other tanks or that it was slow compared to its rivals. However its clear from reading this book that the unreliability of the tiger was very much a feature of how it was driven and cared for by the crew. Under battlefield conditions and in the stress of battle the Tigers systems - pushed to the edge of material and technical  tolerances for the time - could be pushed too far resulting in breakdowns and increasing the need for maintenance.

I thought I knew a lot about tank systems but after reading this volume I can say that my understanding of the Tiger has undergone a step-change in comprehension. This book is a tread-heads dream in the level of detail and insight it reveals about this iconic vehicle. It would be great if the Tank Museum could collaborate to produce similar manuals on other classic tanks in their collection (my vote would go for the Sherman or T34). Simply put if you love tanks you'll love this book and should go and buy it without delay!
Posted by BigLee at 07:30