A couple of weeks ago I took my youngest daughter to the Natural History Museum in London. We went primarily to see the dinosaur exhibits but while we were there I found this modest but unexpected memorial in one of the corridors. 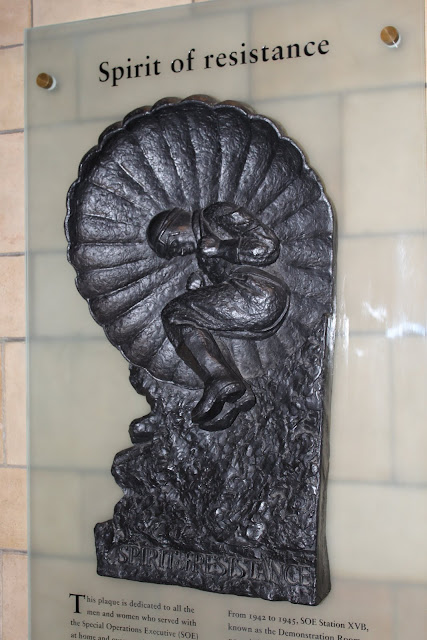 The inscription below the sculpture reads as follows:


This plaque is dedicated to all the men and women who served with the Special Operations Executive (SOE) at home and overseas during the Secon World War.

The SOE was a British wartime secret service organisation established to conduct irregular warfare. Its mission was to 'aid and encourage all resistance to the enemy in the occupied territories'. From 1942 to 1945, SOE Station XVB, known as Demonstration Room, occupied these sealed galleries in this part of the Natural History Museum.

Unveiled by HRH The Princess Royal on 20 April 2004

This was where the hardware and gadgets of wartime spy's and insurgents were displayed. To use the lexicology of James Bond, this was Q's workshop! All manner of weird and wonderful devices were shown here, including exploding rats, petrol can radio sets, folding motorbikes and the other more mundane equipment of irregular warfare. Much of this was designed to be dropped behind enemy lines or with special operatives.

There is more information about the discovery of the Museums wartime role in this article in the Guardian newspaper from 2004.
Posted by BigLee at 06:01