A few years ago I and my family took a trip on the Romney Hythe and Dymchurch Railway. This is a Narrow Gauge train line that runs from Hythe all the way out to Dungeness and runs a selection of vintage steam locomotives. Along the way there's a small museum featuring a model railway and a selection of old toys. Amongst the latter I saw these two classics, both of which I had as a kid. 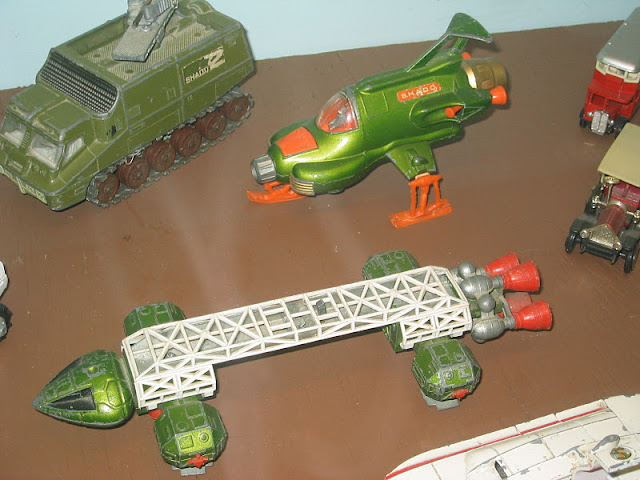 The metallic green spaceship at the top is an Interceptor from the TV series UFO. These were made by Dinkey Toys between 1978-80 and featured a front firing black and yellow missile with a loading spring located on the underside. Recently a mint example, in its box, sold for £132 on eBay!

The model at the bottom was one of my absolute favourites. Its an Eagle Transporter from the TV series Space 1999. This was another Dinkey toy in 1/110 scale. The pod (missing in this example) was detachable and there were several different types to collect.
Posted by BigLee at 09:02