Here's another picture from the Newlyn Collection, this time of a Hawker Typhoon Fighter Bomber being rearmed prior to a mission. This looks like an 'official' photo but there is no indication of which body or agency was responsible for taking the picture. 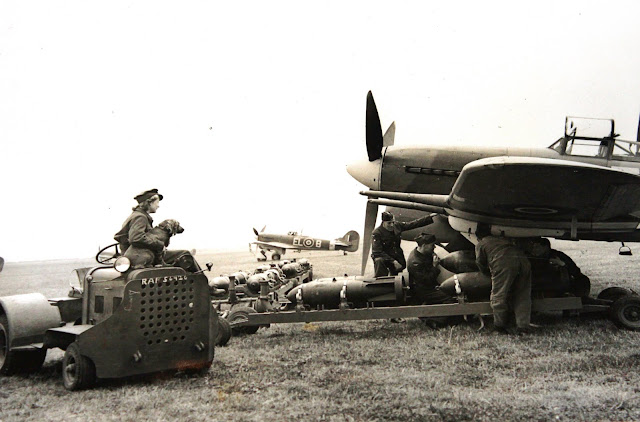 There is a Censors note glued to the back of this image and it reads as follows:


Passed by the Censor - No. 271943
"The Hawker Typhoon - Britain's Latest Fighter-Bomber"
Latest and most deadly fighter-bomber in the armoury of the R.A.F., the Hawker Typhoon is now on full operational duties. Fitted with a Napier Saber engine and armed with four 20mm cannon - two in each wing - it carries two 500lb bombs. Its high speed and great range enable it to penetrate deep into enemy territory on its missions of destruction, while its armament is a match for any Nazi fighters it may meet.

The Typhoon was an invaluable part of Allied air supremacy over Normandy both during and after the landings. The Typhoon was originally intended as the replacement for the Spitfire but eventually settled into the Fighter Bomber role. By October 1943 the Typhoon was being fitted with rockets for its new ground attack role against enemy vehicles of all types.
Posted by BigLee at 07:30