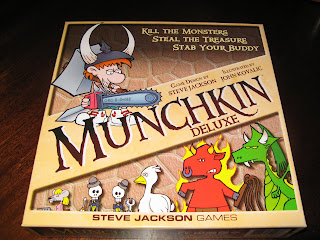 When I went to Dragonmeet a couple of weeks ago I picked up two new boardgames. I specifically chose games that could be played by the whole family and were fun to play. Munchkin by Steve Jackson Games definitely falls into that category. Its also illustrated by John Kovalik (of Dork Tower) who is one of my favourite webcomic artists.

I roped in the kids to help me play this game as it works best with more players (ie more opportunities to back-stab your friends!). The rules are fairly simple and as most of the in-play rules are printed on the cards this is a fairly intuitive and easy game to get into. Its also a real laugh as most of the cards are an in-joke or tongue in cheek dig at the Dungeons and Dragons game and its conventions. Even if you're not an old D&D player like me you'll still find it funny as the artwork and concepts work excellently together.

This first game lasted about an hour and a half but we were working through the rules so I expect future games will be a bit shorter. There are loads of expansion sets for this game and I'm sure I'll be picking up one of these in the not to distant future.
Posted by BigLee at 07:35

Email ThisBlogThis!Share to TwitterShare to FacebookShare to Pinterest
Labels: Boardgames